An amateur local historian, Catherine Corless started an investigation into a local mother and baby home which she remembered from her teenage years. 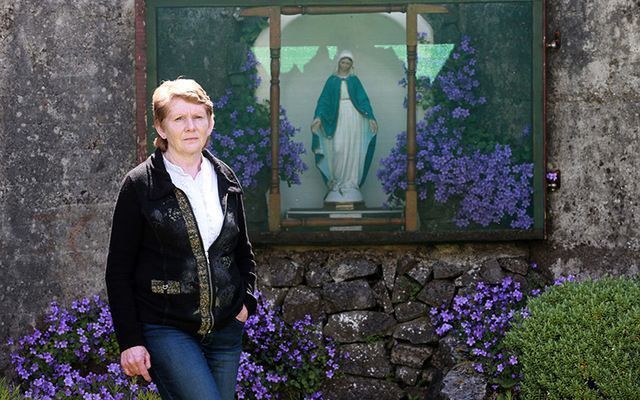 Local Tuam historian Catherine Corless, pictured beside a grotto in the grounds where the unmarked mass grave containing the remains of nearly 800 infants who died at the Bon Secours mother-and-baby home from 1925-1961 rests. Rolling News

Reinhold Niebuhr was a renowned professor and author who taught in Union Theological Seminary for 30 years. He came from a strong Protestant Reformed tradition, and he is probably best remembered as the author of the Serenity Prayer which is now primarily associated with the Alcoholics Anonymous philosophy.

A central theme of his teaching focuses on the knotty intersection of religion and politics. He was convinced that Christians have to be involved in public policy “to keep the strong from consuming the weak.”

Catherine Corless from Tuam in Co. Galway epitomizes the Niebuhr philosophy. An amateur local historian, she started an investigation into a local mother and baby home which she remembered from her teenage years. She knew some of the girls who lived there and attended the same local schools that she did.

The home closed in the early sixties and the area was developed as a housing estate. The Ordnance Survey map showed a mass burial area which the maps revealed included a septic tank more than 100 years ago. Local belief suggested that this was an old famine grave.

In her article in the local historical journal, Catherine asked if the dead children from the home were buried in a sewage pit.  She continued her research and found 798 death records but no indication of where these people were buried.

Many local residents urged her to “let sleeping dogs lie,” not to investigate old grievances that would surely add disgruntlement in the community. As the national media came to deal with the issue, Catherine heard from the Bon Secours Sisters, the religious order responsible for the home, rebuking her for causing anguish for many of their senior members.

There were suggestions to memorialize the site with a large plaque or maybe a statue. Catherine objected strenuously. “A full exhumation is now needed. We must remove the remains of these innocent children – it is no place for them – and give them a respectful burial,” she said.  She promised that this would be part of the healing process for all of the families involved.

Catherine turned down an invitation to attend a reception when Pope Francis visited Ireland.  Instead, she attended a vigil arranged for the same time as the papal Mass, declaring that she was “taking a stand with the babies.”

In 2017 the Mother and Babies Home Commission, set up by the Irish government in response to public pressure, revealed that its investigations showed “significant quantities of human remains” at the Tuam site, confirming Corless’ research. Sample tests revealed that they were dealing with the remains of children, ranging in age from premature babies to toddlers, most of whom died in the 1950s. It definitely is not a famine grave.

On March 1 of this year, the Irish government published the Institutional Burials Bill, which meets all of Catherine’s demands, including exhumation and provision of extensive DNA records which will allow for the identification of families.

She wants an angels’ plot for babies without any live relatives, arguing that the local cemetery, which is just across the road from where the home was located, should be used for the burials.

The airing of the whole Tuam babies catastrophe leading to the decision by the government to exhume and test all the little bodies was due almost exclusively to the perseverance of one exceptional woman who, in the course of her research, discovered that her own mother was illegitimate, with no father listed on her birth certificate.

Her interest in local history led her into many unexplored nooks and crannies that reveal a great deal about the dark corners of Irish life. She worked as a secretary in a textile factory, and then, like so many other Irish housewives, she gave up paid employment to be a full-time mother to the four children she shared with her husband, Aidan.

In October 2018 she was awarded an honorary doctorate by the National University of Ireland in Galway. During the ceremony, the awarding professor, Caroline McGregor, proclaimed that Catherine’s research “sought to re-subjectify the children who had died and their families and relatives who in their moment of death were treated more like objects to dispose of rather than subjects with dignity.”

Who approved this ignominious behavior? The state paid a religious order to take care of these children living on the margins of society. The presumption was that the nuns would ensure that they would be treated humanely and given a chance for a normal life.

The Bon Secours nuns failed to honor their commitments as did every other order of brothers, priests and sisters involved in caring for marginalized youth in those years. Disgracefully, none showed a humane – never mind a Christian – fidelity to helping the most vulnerable children in Irish society.

The core Christian message highlights the importance of every human being – it is a religion in all its denominations governed by subjectivities, completely rejecting any philosophy that objectifies people, that views the poor and the disadvantaged as expendable. Amazingly, all the religious communities, male and female, spend a minimum of one year in preparatory novitiates learning the basics of the Christian life.

Catherine Corless was completely perplexed as she tried to find some rational ground for the sisters departing from Tuam in 1961, abandoning their charges. She puzzled over how they could justify in their own consciences leaving behind 796 children buried in coffins in tunnels, many of them close to the sewage area. There was no inkling of respect for the children, no suggestion that they were treated humanely.

Irish President Michael D. Higgins summarized Corless’ amazing achievement in appropriately glowing terms: “She has demonstrated not only courage and perseverance but a remarkable commitment to uncovering the truth, to historical truth, and to moral truth. All of us in this republic owe a debt of gratitude to Catherine for an extraordinary act of civic virtue.”