Bored, drunk, and violent in Dublin

"What happened in Dublin over the past two weekends was unforgivable, and attempts to shift the blame from those involved are pathetic." 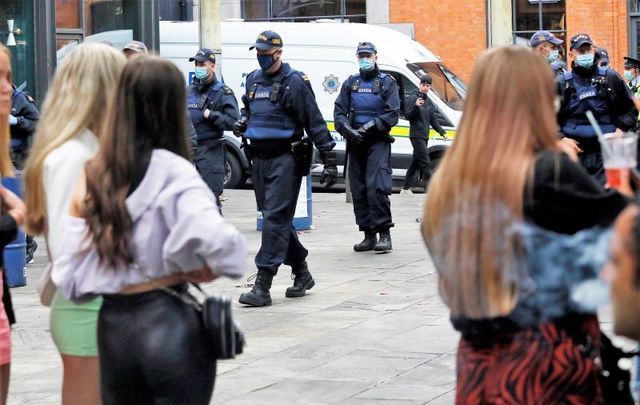 What is it with so many of the young Irish today? The last two weekends brought disgraceful behavior by hundreds of young people who crowded into pedestrianized streets in the center of Dublin to party in defiance of the Covid rules.

There was no social distancing or mask-wearing, even though they were jammed together. Yes, they were outside, but having so many people so close together still provides dangerous transmission opportunities for the virus.

Nor was it just partying to celebrate the partial ending of Covid restrictions. As well as those there to have a good time, there were large groups who get their kicks by causing trouble. Everyone was drinking on the street, boom boxes were blaring and drunken dancing was underway.

Before too long, the craic had turned into anti-social thuggery, fights were breaking out, bins were being set on fire, windows were being smashed and several streets became a battleground with the gardai.

This was going on around Stephen's Green and in parts of Temple Bar, areas normally popular with tourists. Thankfully there are few tourists around these days to see us making a show of ourselves. Even for locals who were in the city center over the last two weekends, it was upsetting and scary stuff.

The weekend before last was bad enough, with the gardai unprepared for the situation and unable to control it. The weekend just gone was even worse, with Saturday night being the peak of the bad behavior. But this time there were enough gardai present, many in full riot gear, to stay on top of the situation.

South William Street was the worst, with the dense crowd of revelers completely filling the lengthy no-traffic area and its footpaths. In side streets and alleyways, so many people were peeing against walls and doorways the urine ran down the sidewalk gutters. A carpet of fast food litter, cans, and bottles covered the ground.

As the mood became ugly and random fighting began, the few shops that were open closed their doors. Bottles and other missiles were thrown at gardai trying to disperse the massive crowd. A baton charge by the garda public order unit, complete with riot shields, was needed to restore order.

Several gardai were injured and ended up in hospital. Around 50 people were arrested over the weekend.

The baton charge provoked a predictable reaction from Sinn Féin and a few far-left politicians, who moaned about the gardai being heavy-handed and about mixed messaging from the government.

It is true that as the restrictions were eased in recent weeks, ministers have been encouraging people to socialize outside, to have "an outdoor summer." Now, when young people did that they were being beaten with batons, Sinn Féin said. The government needed to "manage" the situation in a much better way, the Sinn Féin leader Mary Lou McDonald insisted.

This sounded like an attempt to excuse the inexcusable. We all know that Sinn Féin will use everything possible to find fault with the government, but even for them, this was idiotic stuff.

Yes, people have been asked by the authorities to socialize outside, but in small groups and in a way that is safe. This does not include turning streets in the center of Dublin into a Covid promoting mass gathering, with rioting, thuggery, and vandalism.

Of course, everyone is fed up with the restrictions of the past year and the successive lockdowns. Young people in particular are frustrated and want to let off steam.

But we're all fed up, not just the teenagers and young adults. What happened in Dublin over the past two weekends was unforgivable, and attempts to shift the blame from those involved are pathetic.

Sadly, this kind of behavior is all too common here and it predates the Covid restrictions. Dublin city center is no longer a safe or comfortable place to be in the evenings.

Even the iconic O'Connell Street is dirty and threatening after dark, with too many young people out of their heads on drink or drugs, shouting, and having running battles. The beautiful boardwalk along the river Liffey is a no-go area even in the daytime, with druggies doing deals and passing out on the benches before waking up again to beg from local office workers and unsuspecting tourists.

It's too easy to blame the government for this decline in behavior among the young here. There is something more fundamental going on, a shift in our society that is beyond the control of successive governments.  Its roots lie in boredom, an aggression that is just below the surface, an expectation that whatever you want should be available to you without any effort.

The disconnect was all too visible over the past two weekends, not just in the way the partying turned into vandalism and violence.  It was also evident in the way the crowds treated the city center like a garbage tip, dropping their cans, bottles, and wrappers on the streets.

The clean-up each morning produced trucks full of rubbish. Among so many of the young, there is no sense of ownership, no feeling that these are their streets, their parks, their beaches, and should be respected.

The answer to this problem probably lies in the schools because it is clear that these young people are not getting any guidance at home. We need a far greater emphasis on civics, on how society works, and on what is acceptable behavior. Above all, we need to instill a sense of pride and ownership in our young so that they value what is around them and respect the people around them.

Instead of this, too many of our youngsters are bored and alienated by our overly ambitious and academic school curriculum. They leave school barely literate and numerate, confused by and resentful of the society that surrounds them.

Escape into drink, drugs and random violence is all too attractive. Any opportunity to party -- like the easing of Covid restrictions  -- is seized on and seems to be satisfying only if it descends into mayhem.

The worrying thing about what happened over the last two weekends is that we still have a long summer ahead of us, during which restrictions will be eased even more. From this week bars and restaurants are allowed to provide service at outdoor tables and from next month indoor service will resume if all goes well. Hopefully, this will reduce the amount of on-street drinking and the trouble that goes with it.

Unlike in most places in the U.S., on street drinking is not illegal here. It's not usually a problem but in recent months as bars were allowed to serve takeaway pints it has become one.

The rule is that you are supposed to be 100 yards away from the bar before you take the lid off your drink. But it's impossible to police when large crowds gather.

As normality begins to return here in the coming months, the government is set to reduce the massive Covid supports that give free money to so many people. From September, the Pandemic Unemployment Payment (PUP) is to be reduced and will be tapered away over several months.

Already Sinn Féin and the far left are opposing this, shamelessly playing populist politics. The reality is that the PUP is now a serious disincentive for many people, particularly young people, to return to work.

Just like in the U.S. (where payments are even higher), small businesses in the hospitality sector here are finding it impossible to get staff as they reopen. Why bother working when the PUP gives you as much and you can party through the summer and think about getting a job in the autumn?

The ending of the free money is likely to prompt more resentment and more trouble. But it can't go on forever. And it's not good for promoting a work ethic in young people and giving them a sense of achievement.

More than anything, the scenes in Dublin city center over the last two weekends have exposed again the difficulty we have here. Apart from Sinn Féin's attempt to blame the authorities, the government itself has been attempting to play down what happened, claiming that only "a very small minority" were involved. The widely shared videos on social media do not support this.

We have a real problem here with too many of our young people, one that predates Covid and its frustrating restrictions.  And pretending that it does not exist will not produce a solution.