Making a break from Belfast to Canada in the 1970s, Patrick found that making a new life can be lonely. 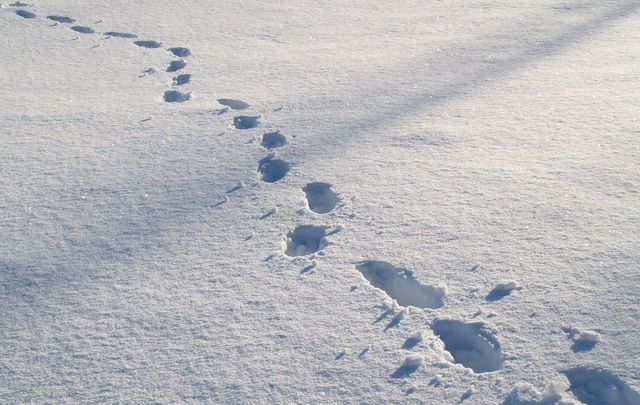 Footprints in the snow: "Call me fanciful but I felt that these boot prints were telling me something about the loneliness of my new life." Andrei! / Flickr / CC

A new life, a new job, a new alien country, and the footprints in the snow that revealed the truth of starting out and building a new future.

In my mid-20s, when I finagled a job in Canada, I didn’t think twice about leaving Ireland. Having spent most of the early 1970s in Belfast worrying about being blown to bits or murdered for my Catholic religion emigration seemed like a smart move.

A few weeks after my visa came through, I left on a Friday morning in late January on a one-way ticket to Toronto where I boarded a Greyhound bus that, a few hours later, pulled up at a motel on the edge of the small town where I’d start work on Monday morning.

I stepped down onto the hard shoulder of the highway, poked around the luggage compartment, hauled out my two suitcases, banged the door shut and the bus moved off leaving me in a frozen, dark world as alien as the surface of Mars and probably just as cold.

At the motel reception desk I took a key from the employee who couldn’t have been less interested and in my room I sat on the edge of the bed wondering what the hell I'd done. At 3 am, wide awake from jet lag I listened to that signature sound of lonesome -- the horn of a freight train rumbling along tracks a few frozen fields from the motel.

On Monday morning I started my quality assurance job that many in the factory thought should have gone to someone local. Even at the best of times quality isn’t a popular role and for this immigrant, there were no best of times. When rejecting raw material, or quarantining products, I heard many F-bombs and other, more inventive expletives that all were very new to me.

My second Friday on the job brought me some much-needed cheer in the form of my first paycheck and then when I left the factory at 5pm my mood got another boost -- the sky was still bright which meant I could hope for an end to this heart of darkness, winter.

Sadly the mid-February late afternoon sunlight wasn’t quite the silver lining I thought it to be because it allowed me to see clearly a solitary line of boot prints in the snow leading straight to the factory I’d just left. At first, I didn’t pay much attention to these solitary boot prints until a thought crossed my mind and stopped me in my tracks - literally.

Slowly I turned through 180 degrees and placed my left boot in the left boot print and then I swung my right boot around into the right print. A perfect fit! – Now I knew who owned these boot prints. I did. I’d left them here this morning on my way to work. Call me fanciful but I felt that these boot prints were telling me something about the loneliness of my new life.

As I stood there by the side of the highway I almost gave up. Had smartphones and the Internet been invented I might have booked a one-way back home there and then. However, I had no easy-to-reach escape hatch so I just walked to the motel and later I jogged across the highway to the truck stop for my usual chicken dinner. That evening, I watched TV, went to bed and the next morning I got on with this new life that I`d pulled down around my ears.

The following week, a colleague explained that he and his wife were vacating their apartment, and if I wanted to, he’d recommend me to the landlord. Of course, I took him up to his offer and on March 1 I moved into the apartment which, once I’d furnished it, was a big improvement on the motel room.

I got through the tail end of the winter playing badminton in the high school gym, five-pin bowling with the guys from work, teaching myself to sketch, catching up on my reading and many evenings I closed the town library. When summer came I played tennis, soccer and even tried softball and in the fall I rented a car and drove through the countryside admiring the colors. In mid-November, winter came back but this time I was dressed for it and I knew what to expect.

I didn’t give up and I didn’t go home and all these years later I’m very settled but I still remember that mid-February Friday afternoon by the side of the highway when I realized that the solitary line of boot prints in the snow were mine. It was a difficult moment but previous generations of Irish emigrants faced worse - much worse - and they’d kept moving forward, and so did I, because that’s what we do, at home or abroad.