IrishCentral Contributor CJ Clancy takes a look at the life of British activist Bertha Quinn, who was born to Irish Catholic parents. 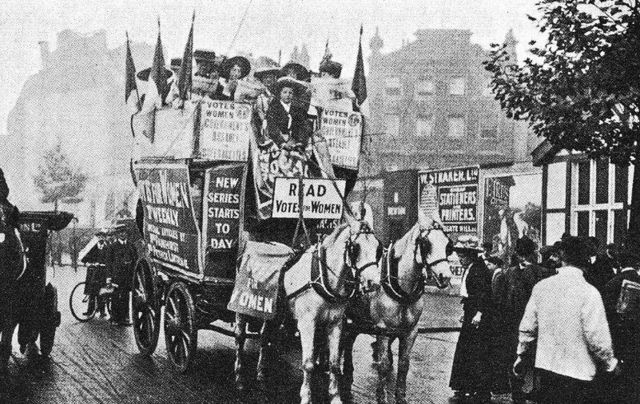 Circa 1911: Members of the Women's Social and Political Union campaigning for women's suffrage in Kingsway Public Domain

Bertha Quinn was a suffragette, socialist, trade unionist, prisoner, and hunger striker. In 1946, she was awarded the papal Benemerenti Medal

"Quinn would neither be frightened out of her convictions, nor laughed out of them. She would stand in all weathers outside the cathedral and sell tickets for good causes."

"In spite of her caustic tongue, she was a loyal friend to anyone in trouble, very womanly. Good living, straightforward, thinking of everyone before herself. Her life was an example to the younger generation."  - Lord mayor H. O'Donnell in the Yorkshire Post, 1951.

Born to Irish Catholic parents in Middlesbrough in Britain in 1873, Bridget Quinn became a worker in the garment industry and became involved in the militant suffragette movement Women's Social and Political Union (WPSU). Quinn frequently took part in WSPU protests, including chaining herself to the house of commons railings, and was arrested five times and sent to Armley prison for eight days for protesting Prime Minister Herbert Henry Asquith's visit to Leeds in October 1908.

In April 1909, Bertha and four other suffragettes, accompanied by a male companion, entered St. Stephens Hall in the House of Commons under the guise of meeting an MP. At 4 o'clock, Quinn blew a whistle and attached a WSPU banner onto a statue of Lord Sommers. Theresa Garnett, Margery Humes, and Sylvia Russell attached themselves to other nearby statues and also whistled and made speeches in the nearby Central Hall.

The statues the women had attached themselves to commemorated men who campaigned for 'British liberties' in Stuart days, and the women said they were doing the same for 20th-century Britons.

A hundred years after the event, 78 MPs signed an early day motion to commemorate the actions of Quinn and the other women and to continue encouraging all women to vote and for parliament to move towards gender balance.

In 1917, Quinn was one of two delegates sent to the Leeds convention of the independent labour party and the British socialist party. Attending the convention were many of the leading politicians of the day, including Keir Hardie, H.H. Asquith, Lloyd George, Ramsay MacDonald, Bernard Russell, Ernest Bevin, who were controversially calling for action in solidarity with Russian workers and soldiers after the Russian Revolution.

The event had been resisted by city dignitaries but went ahead due to the pressure of numbers. It carried a motion of world peace, a charter of human rights, and congratulated Russian revolutionaries, and encouraged the same organised activism in the British working class.

In May 1925, Quinn was among a large proportion of Catholics (Catholics were a minority at the time period in Britain) in the Tailors and Garment Workers Union. Influenced by her Catholic faith, she declared birth control as a 'crime against god', and information supporting it was 'filth'. Quinn was immediately reprimanded by 'Red Ellen' Wilkinson for being insulting and pleaded with Quinn to refrain from assuming impure motives from delegates with sincere but opposing views. The motion was passed but remained a contentious issue across various Labour parties for years.

In 1926, during a general strike, Quinn was a leading member of the Leeds council of action, later elected as labour councillor from 1925-1943, at one staged expelled from the party. Even up to the age of 73, Quinn still attended as a councillor at Leeds council meetings and was described as 'fiery'.

At the 1936 Trades union Congress, Quinn represented the Tailors and Garments Workers Union and the Catholic workers opposed the Spanish civil war on both sides of the conflict and decried 'Red outrages have been perpetrated in Spain.'

Quinn objected to her own union's Congress that British workers groups were being asked to express solidarity with the Spanish trades unions, a point taken up by the Catholic press. Quinn prevented her clothing from being collected and shipped to Spanish revolutionary side. Her finals words "I have made my point and that is all I wanted."

Bertha Quinn died in 1951 and was buried at Killingbeck cemetery in Leeds. A relentless and fearless campaigner in a time when very few people went against the grain. Now hardly remembered by either Catholics, socialists, or even feminists.