Babe Ruth Day: The Irish American behind the Sultan of Swat 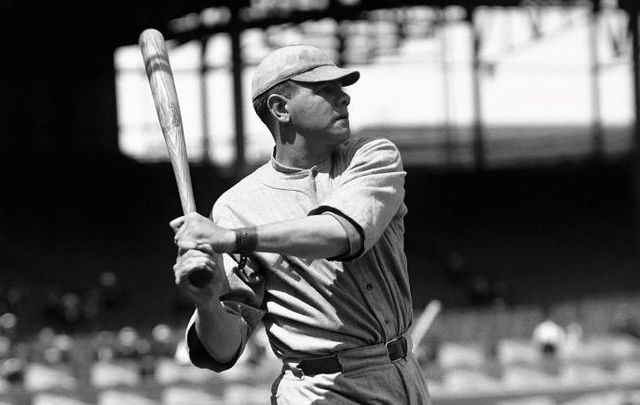 *Editor's Note: This column first appeared in the October 2018 edition of the Irish Voice newspaper, sister publication to IrishCentral.

Well, another baseball season has come and gone, at least for New York Yankees fans like myself. The forthcoming playoffs and World Series should be fun, but once the Yanks play the Sox it just seems like something is missing.

In the wake of the Yanks’ three games to one series loss to the Sox, plenty of blame fell on the broad shoulders of newly acquired Yankees slugger Giancarlo Stanton. He had himself a fine first year for the Bronx Bombers, slugging nearly 40 home runs.

No, it was never realistic to expect Stanton to hit 59 homers, as he did for the Miami Marlins the year before the Yankees signed him. Still, was it too much to ask for one, just one, dinger against the Red Sox?

Apparently. Because what we got from Stanton this time around was more strikeouts (six) than hits (four), and not a single home run in 18 at-bats.

Either way, you have to be a fairly dedicated baseball fan to even know who Giancarlo Stanton is. Which says something about how much baseball has changed over the decades.

Now that the Red Sox are in the World Series, who is Giancarlo Stanton rooting for? https://t.co/V4dDcu0KOQ pic.twitter.com/D0sAqAQxxy

“What is most striking about Ruth at this remove is how thoroughly modern he was, not just in the way he attacked a baseball but also in the creation, manipulation, and exploitation of his public image at the precise moment in history when mass media was redefining what it meant to be public.”

That’s from a new book entitled "The Big Fella: Babe Ruth and the World He Created" by Jane Leavy. It was featured this week in The Wall Street Journal and New York Daily News, and may be the most comprehensive look yet at George Herman Ruth’s life and times.

Home runs are not the only reason those villagers in China and New Zealand have heard of Babe Ruth.  Another big reason is an Irish American by the name of Christy Walsh.

“Walsh believed in two things: Irish independence and the power of advertising,” writes Leavy. She makes it clear that Walsh paved the way for future sports agents who -- for better or worse -- would change athletes from mere stars into cash-printing “brands.”

This was no small feat considering that just a few years before his amazing 1927 season Ruth was down in the dumps, a tabloid target who’d publicly trashed his marriage, and whose partying ways had led to serious physical problems.

But Walsh had a plan to manipulate the public and turn the Babe into a one-of-a-kind star. And he did it, creating a blueprint for many other athletes to follow.

“He wore shamrocks and Kelly green ties in solidarity with the movement for Irish independence,” writes Leavy, adding that while Walsh was “a devout Catholic and son of Ireland,” he also “pined for the old sod though he never set his foot on it.”

Walsh also rubbed elbows with political power brokers from Tammany Hall bosses like Jim Farley to New York Governor Al Smith. In fact, Walsh convinced Ruth and power-hitting teammate Lou Gehrig to campaign for Smith, the first Catholic to stage a real run for the presidency in 1928. (He was trounced, thanks in no small part to anti-Catholicism.)

There is, sadly, a dark side to the Walsh-Ruth story. Ruth’s parents essentially allowed him to be raised by the Xaverian Brothers, many Irish, at St. Mary’s Industrial school in Baltimore.

He discovered baseball there, but his chaotic lifestyle surely had its roots in that difficult youth. Walsh often acted like the stable parent Ruth never really had.

And yet, 70 years later, from Yankee Stadium to New Zealand, we’re still living in the world Ruth built.