The United States Director of the National Institute of Allergy and Infectious Diseases is living proof that immigrants in America do great things. 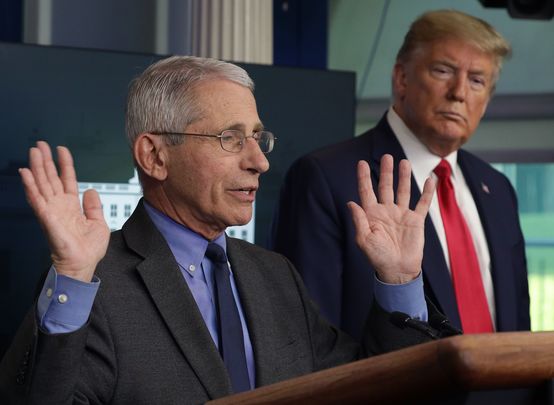 The United States Director of the National Institute of Allergy and Infectious Diseases is living proof that immigrants in America do great things.

About 100 years ago, in May of 1920, a Masonic order in Colorado Springs, Colorado, passed a resolution "proclaim(ing) our belief in the free and compulsory education of the children of our nation in public primary schools."

This might seem like good ol’ patriotic boilerplate.  But it was actually the first shots in an epic religious, political, and cultural war that would not end until the Ku Klux Klan and the U.S. Supreme Court got involved.

And these days, if you are one of those people who are not comfortable going to sleep until you hear the latest update from Dr. Anthony Fauci, well, you may want to offer up a round of applause not only for essential workers but also for the Irish brothers who’ve been running Catholic schools since Babe Ruth was swatting home runs for the Yankees.

We’ve spent recent years talking a lot about the bad things that happened at such schools.  But they gave us lots of people like Anthony Fauci, and it’s important to remember that.

Fauci is a classic (what I like to call) “Ellis Island American.”  As he told C-Span interviewer Brian Lamb (watch full video below) a few years back,  “I was born and raised in Brooklyn, New York, in the Bensonhurst section...if you took an aerial photo and looked at different sections, they were ethnically divided. There was the Italian American section, the Irish section, the African American section, the Puerto Rican section.”

He added, “My father is first-generation. His father was born in Italy. He came to the United States at the turn of the century...My father was raised early on in the Little Italy section of New York and Manhattan, moved to Brooklyn, and then our family was raised in Brooklyn.”

But that is only part of the story. Because a big chunk of Ellis Island Americans are Catholic. And so many urban immigrant children were educated in the Catholic school system.

Anthony Fauci is no exception.

That’s where the Ku Klux Klan and the U.S. Supreme Court come in. A century ago, groups of stable genius bigots argued that Catholic schools -- whatever their merits may be -- were simply not American institutions.  And so, they needed to be shut down. Such respectable folks did not need to don hoods and robes to spout the ideology of the KKK.

This coronavirus nightmare has made it easy to forget that religious education -- Jesuit, Muslim, Jewish, whatever -- has long been viewed as un-American.

And yet, Dr. Fauci is a reminder that Catholic schools (he went to Regis in Manhattan) gave immigrants and their children a chance to enter the elite. As a 2002 New York Times story about Manhattan’s Regis High School put it:

“In 1914, an anonymous benefactor founded a school offering a free rigorous education to boys who were Roman Catholic and who lived in New York City. Most of the city's Catholics were Irish, Italian or German immigrants with little money or education.”

This is something pro-Trumpers should keep in mind when they bash Dr. Fauci as some kind of oppressor of the common man.

If this guy does not represent the American Dream to you, you must have some Nazi-level fears about American racial and cultural “purity.”

Some schmuck from Arizona who serves in Congress named Andy Biggs recently posted “I think it’s time … for Dr. Fauci to move along. I mean, he shouldn’t have a seat at the table,” and added that negative sentiment toward Fauci “is growing on the Hill.”

What Dr. Fauci should really tell these angry knuckleheads is, “Hey, if you want to go breathe and sneeze all over each other, go for it.”