The current situation in America suggests that the democratic system is on the ropes with limited scope for an optimistic outcome. 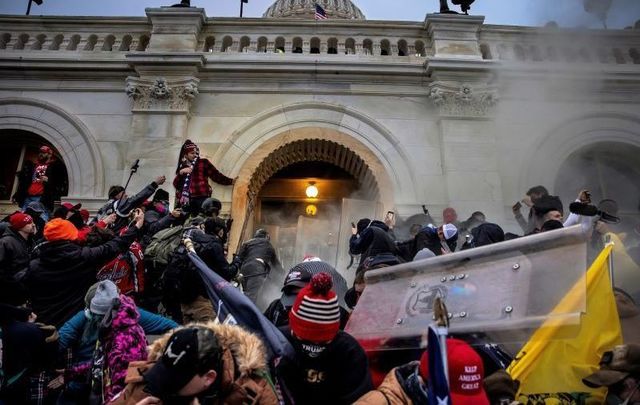 49% of Republicans and Democrats believe that democracy in the United States is on the ropes. Could America's fate be the same as ancient Athens?

Athenian democracy lasted about 250 years from the early seventh century B.C.E. It was a magnificently successful experiment involving military domination over the belligerent Persians while Athens grew in stature and wealth.

And, famously, their educated class produced treasures of architecture, philosophy and art that continue on a high admiration pedestal to this day.

The second experiment in democracy arose 2,000 years later with the American Constitution, guaranteeing representative local rule after George Washington and his colleagues ended British political control over the continent. The United States has dominated much of world history, economically, culturally and militarily, since that revolution in 1775. Like Athens, it too can claim major achievements as it approaches the 250-year marker.

Unfortunately, the main message from the Greek experiment indicates that success does not breed success. Democracy has to be nurtured and it must prove itself repeatedly or it will disintegrate as happened in Athens.

The current situation in America suggests that the democratic system is on the ropes with limited scope for an optimistic outcome.

According to a troubling poll by Schoen Cooperman Research, a majority of Americans now believe that democracy in the United States is in danger of disappearing. Just 26% feel that it is secure for future generations. A shocking 51% assent to the statement: “U.S. democracy is at risk of extinction.”

This fear of the demise of our current system was shared equally (49%) by Republicans and Democrats, with 54% of independents also agreeing. The most depressing result of the survey indicated that among young people under age 29, only 21% feel that democracy will last in the United States.

Abundant divisions have always been evident in the American story, but the internal disagreements riveting the system today tear at the very structure of democracy. About 70% of Republicans believe that Joe Biden lost the last presidential election and that he is just a pretender in the White House. There is not a scintilla of evidence supporting this cynical view, but it has led to widespread disaffection among a huge swathe of people.

Roughly 40% of politically active citizens say the members of the other tribe are just plain evil, and 60% believe the “others” constitute an unspecified threat to the country. Some scholars reacting to these and similar polling results warn that another civil war has become a real possibility.

The threats to the democratic system have solidified around the riot in the Capitol on January 6, 2021. Over 140 police officers were injured on that day as the mob pointed to the hangman’s gibbet for Mike Pence for fulfilling his formal vice-presidential duty of validating the election results.

Rudolph Giuliani and his team of lawyers had pleaded their case for fraudulence before dozens of judges in various cities. They attempted to show that the election was corrupt without any supporting evidence for their vapid assertion. Every judge dismissed their claims as lacking real substance, and Giuliani was barred from practicing law in any court in New York because of his unprofessional behavior.

The Thompson / Cheney congressional committee has demonstrated that the coup on the 6th was planned by then President Trump in order to prevent the certification of the election by his vice president. The rioters were clear that this was their goal. The system just about held and Biden is serving as president, although only 54% of the population consider him the legitimate leader.

Democrats and Republicans need each other for a functioning democracy. However, rejection of the official 2020 results has hardened, with close to three out of four Republican voters declaring that Donald Trump is still the legal president of the country.

Republicans seem to be saying that they will participate in the electoral contest as long as they are assured of success through control of the polling rules and the vote-counting. That is their conditio sine qua non for continuing to be part of the game. It is a clear recipe for an autocratic America.

They are not hiding their plans. Their leader, Donald Trump, proclaims every day that the election that he lost was stolen, an assertion that has no grounding in facts.

In several key states, the administration of voting has become partisan. In Georgia, for instance, Republicans have weakened the office of secretary of state after Brad Raffensperger, a leading member of their party, refused to accede to Trumpian demands to change the results of the 2020 election.

In Michigan and Pennsylvania Republican candidates who claim that Trump was cheated in 2020 are determined that this won’t be repeated in 2024. Doug Mastriano is their candidate for governor in Pennsylvania, and he has gleefully assured his voters there that, provided he is elected, he will appoint a secretary of state who will call the “right” result in 2024.

The bottom line is that if Democrats again win crucial races for control of both houses of Congress and the presidency in 2024, it is likely that Republicans will exploit the infected election machinery in swing states to block them from taking office.

Implementing policy changes that win popular support in elections is central to a functioning democracy. This does not apply in America where the filibuster requiring 60 votes in the Senate rules out almost any meaningful changes to combat growing poverty and inequality or to institute a fairer tax system. The 50 Republican senators, representing about 30 million fewer citizens than the Democrats, have veto power over every piece of progressive legislation.

People rightly see these factors as peculiar and bizarre features of a democracy where the political structures should ensure that the majority rules. For instance, around 70% of Americans support sensible gun control measures that ban ownership of weapons of war and insist that anybody owning a gun should be licensed.

The NRA, a powerful lobbying group that pours money into elections, rejects legislation that would control gun ownership, making clearly bogus claims that the constitution protects ownership of killer weapons like the AR-15.

The legal purchase of a deadly semi-automatic weapon by an 18-year-old who slaughtered 19 fourth graders and two teachers was decried on all sides. The political response after weeks of negotiations between Republican and Democratic senators amounted to fig leaf legislation mainly providing funding for better mental health care and moving the ownership age for deadly weapons up a few years.

The House of Representatives with a majority of Democrats passed a bill banning ownership of assault weapons, but that wasn’t even discussed in the senate where the NRA rules. The American people see this kind of democracy as a sham, and, understandably their allegiance to it is flimsy.

In Athens, democracy disintegrated when the rich grew super-rich and cared only about displaying even greater grandeur and opulence. Is this the point that America is at today?

Justice Louis Brandeis is remembered as an outstanding Supreme Court justice who served in the early decades of the 20th century. In a prescient statement about this topic he wrote, “We may have democracy or we may have wealth concentrated in the hands of a few, but we can’t have both.”