Ivana Trump lies, looking like a cruel afterthought, in a stark grave that it turns out supplies her ex-husband Donald Trump with a handy trifecta of tax breaks. 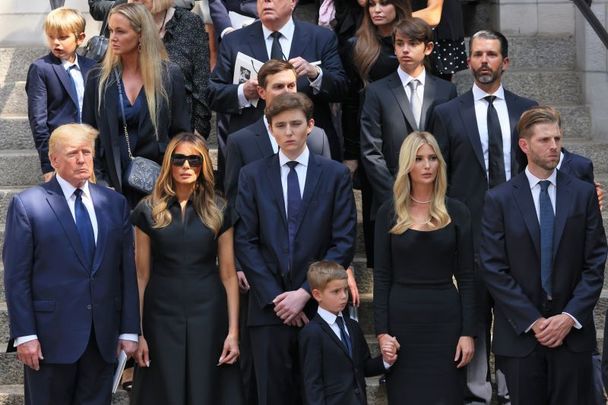 July 20, 2022: Former US President Donald Trump and his wife Melania Trump along with their son Barron Trump, and Ivanka Trump, Eric Trump, and Donald Trump Jr. and their children watch as the casket of Ivana Trump is put in a hearse outside of St. Vincent Ferrer Roman Catholic Church during her funeral in New York City. Ivana Trump, the first wife of former US President Donald Trump, died at the age of 73 after a fall down the stairs of her Manhattan home. Getty Images

There are goldfish who have been buried with more apparent solemnity than poor Ivana Trump received, some critics are saying.

The first wife of one-term president Donald Trump, she was laid to rest in an obscure plot near the first hole of his golf course at Trump National Golf Club Bedminster in New Jersey on July 20.

To some observers, it looked worse than sending her last remains to a potter's field. To them, it amounted to the final insult in a last act that had already known a surfeit of them.

Ivana last made the headlines for famously enraging Trump's third wife Melania by referring to herself in a broadcast interview in 2017 as Trump's original First Lady, receiving a sharp rebuke from Melania's furious White House team.

The former president announced her passing on his much-maligned Truth Social platform stating: “I am very saddened to inform all of those that loved her, of which there are many, that Ivana Trump has passed away at her home in New York City,” he wrote.

Ivana Trump, the ex-wife of former President Donald Trump has died, per a post on Truth Social pic.twitter.com/9Y8zVYZd1D

The distancing language was unmistakable, as Trump conspicuously left himself off the list of the “people that loved her.” But the final resting place he chose for her said even more.

As a tax researcher, I was skeptical of rumors Trump buried his ex-wife in that sad little plot of dirt on his Bedminster, NJ golf course just for tax breaks.

So I checked the NJ tax code & folks...it's a trifecta of tax avoidance. Property, income & sales tax, all eliminated. pic.twitter.com/VDZBlDyuhQ

I'm not sure why this story isn't being discussed more. It seems to say so much about the opinion Trump has for the people closest to him, so attention should be paid.

Some reports have tried to sweeten the sour taste by insisting the former president has ambitious plans for a family plot at the New Jersey golf course, a favorite of his, but the lone grave of his estranged first wife gives the lie to that claim.

There she lies, looking like a cruel afterthought, in a stark grave that it turns out supplies her second husband with a handy trifecta of tax breaks. Reportedly, because of her odd placement, the property, income, and sales tax for the resort are now all eliminated.

Under New Jersey state tax code, any land that is dedicated to cemetery purposes is exempt from all taxes, rates, and assessments. In other words, the presence of human remains on the site reportedly allows a series of handy tax breaks to kick in, with a corpse onsite sufficing to make at least three forms of tax disappear.

So never let it be said that he could not put his ex-wife to some use, I guess? But in this way? To this effect?

How on earth can her three children, who she apparently loved and who loved her back, allow their father to treat their mother like this? Burying her in little more than a pauper's grave disgraces them all.

Since Trump himself has not been her next of kin for decades, he could not have himself alone decided her final resting place. This would have involved her children and the executor of her estate. They would all clearly have had to agree to this.

The only thing planted at a Trump property was Ivana.

Trump famously believes taxes, like military service, are for suckers. But to reportedly put your estranged first wife to work - in death – to solve a problem in life looks horrendous.

And what chilling thing does it say to his famous and powerful guests that his first wife is buried at the first hole of his favorite resort? As they put on their golf gloves, will they coldly reflect that “this too could be you?” Is that the kind of pound shop mafia play being enacted her? And will Trump start to place a different wife at different holes as their times come?

Additionally, in this strange saga, there are disconcerting notes. Ivana was reportedly cremated, so the why – other than for tax breaks - place her ashes in a coffin and then bury them on the course?

Ask yourself also, would you do this? Bury your spouse – albeit your first one - in a golf resort? In a grave that has less apparent dignity than the average pet cemetery?

Life for all of us can be a hard business and heavens know a good round of golf can provide a respite for many.  But to turn our pastimes into our final resting places is inexplicable at best and crass at worst - I'm just going to tee off -and- visit mom? So, two birds with the one stone?

Poor Ivana probably deserved better, critics contend. But she married who she married.