America is losing the “patriot game” 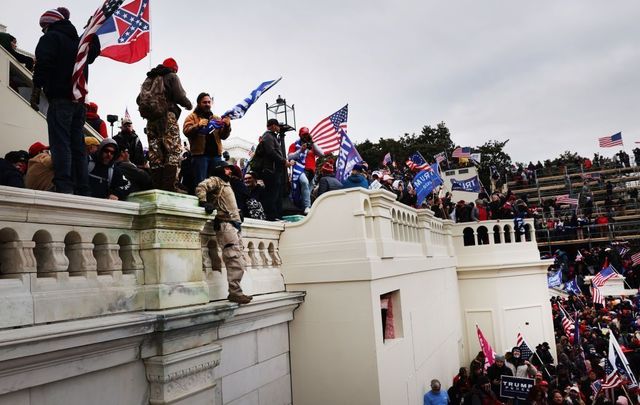 Rioters at the US Capitol on January 6, 2021. Getty Images

On the bright side, at least they had a St. Patrick’s Day parade in Boston 100 years ago this week.

The bad news? Lots of Irish Americans were accused of disloyalty. They were simply not behaving like good American patriots.

On March 17, 1921, bigwigs in the U.S. military were concerned that Irish Americans decked out in their full military uniforms would be seen marching in the Boston St. Patrick’s Day parade, which took place on the same day Beantown celebrated Evacuation Day commemorating when the Brits fled the American colonies during the Revolutionary War.

Military officials did not want soldiers representing the U.S. marching with groups like the American Association for the Recognition of the Irish Republic.

“Because it was understood that the flag of the so-called Irish Republic would be carried in the parade,” The New York Times reported at the time.

You might recall that Irish rebels were engaged in a war with the Brits in 1921. Britain was officially a U.S. ally, so for the Irish to be celebrating the enemy of a U.S. ally…not a good look.

Just as marching under the flag of a country that was not America, and also which, technically speaking, did not yet exist…also not a great look.

“Army officials” warned that Irish American vets “would be subject to federal prosecution,” if they defied the order.

And yet, “soldiers of Irish blood” said that “they intend to march in uniform,” according to the Times.

President Warren Harding himself had to step in.

Did Irish vets accept the final word of their commander in chief?

Not unless you consider labeling someone a “devotee of Toryism” a patriotic compliment.

“Are these officials American? Or satellites or foreign powers?”

See how much fun the patriot game can be?

This is helpful to keep in mind as we emerge from our Covid fog.

Yes, people are still fighting over masks and vaccines, but sooner or later, some kind of normalcy will return and we will instead fight over our stimulus checks, and who “deserves” them, and who doesn’t.

Irish American commentator John Patrick Leary, in this month’s New Republic magazine, wrote about the “confusion over what it means to be an American patriot, torn between a schoolboy myth of heroic rebellion and a fawning devotion to power.”

Leary added, “It was in that spirit that the Capitol rioters invaded the Senate, looking for traitors and crying out, ‘Hold the line, patriots.’”

It’s not hard to imagine one of those invaders raging against immigrants and the “un-American,” while at the same time sporting a Celtic Cross tattoo and loving his grandfather who might have marched under the “un-American” flag of the Irish Republic 100 years ago.

More progressive folks feel “America is permanently divided between oppressor groups and oppressed groups,” and so “Joe Biden’s insistent call to unity seems naïve,” David Brooks wrote not long ago in the Times.

Such righteous rage “has caused many people to give up on patriotism altogether.”

If it’s any consolation, another old-timey cartoonist -- Thomas Nast, the Dr. Seuss of his day -- earned most of his money sketching the ways ape-like Irish Catholics were ruining America.

Since Irish immigrants were incurably violent, he sometimes slapped them with the name “Pat Riot.”

You see what he did there?

Good thing, in 2021, we would never simplify complex arguments just to make the other side look bad, right?