With Dr. Seuss now forbidden, isn't it time for Thomas Nast to be ridden?

Six books in the Dr. Seuss series are no longer in print, but what of the 19th-century cartoonist Thomas Nast's works including anti-Irish depictions? 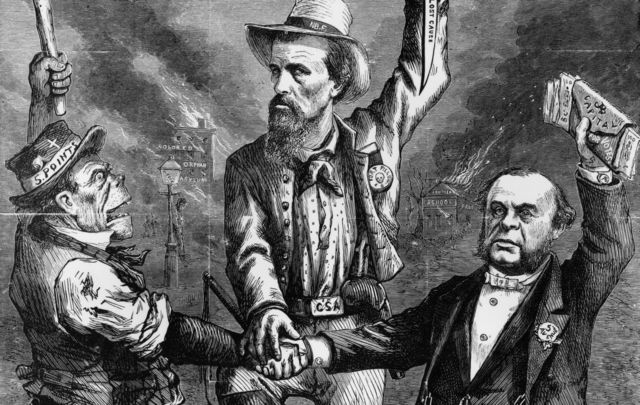 1867: An illustration by Thomas Nast, satirizing reconstruction in the southern states as a conspiracy between Irish immigrants, who were often members of gangs like the Five Pointers in New York, who solidly voted Democratic and Confederate veterans and rich businessmen who combined to prevent black Union veterans from voting. Getty

Six books from the children's book series Dr. Seuss have been banned from publication in the US due to images of Asians and Black people classed as racist. The Ancient Order of the Hibernians National Anti-Defamation Chair questions whether it's time to ban the cartoonist Thomas Nast also.

Many people were shocked with the decision to withdraw from publication six of the books of Dr. Seuss (Theodore Geisel) because the books "portray people in ways that are hurtful and wrong." The hitherto beloved children's author, the creator of such icons as "The Cat in the Hat," "The Grinch," and "The Lorax" has come under increasing criticism for the use of racial stereotypes and tropes. The National Education Association, which founded "Read Across America Day" in 1998 and deliberately aligned it with Geisel's birthday to play on his popularity, has been gradually exorcising him from the program.

The reason for this literary exile is the images that Geisel used in illustrating his books leverage negative ethnic stereotypes and tropes which no one looking fairly and objectively can deny. Chinese characters are depicted with conical hats, their hair in queues, and with chopsticks. African characters are portrayed as if out of a minstrel show.

For all of Dr. Seuss's brilliance, it is undoubtedly correct to question the appropriateness of these dated stereotype images in programs to educate children in the 21st century.

However, the banishment of Dr. Seuss raises the question as to why another, and far more deliberate, the proponent of racist imagery, is habitually given a pass: Thomas Nast.

Thomas Nast is frequently credited as "The Father of the Political Cartoon." Nast is credited with creating the popular image of Santa Clause, the use of the elephant as a symbol of the Republican party, and the female character of Columbia as a personification of the United States. Nast is often characterized as a crusading journalist whose political cartoons exposed Boss Tweed and helped bring down Tammany Hall's corruption.

However, there is one other truth about Nast: he was a bigot by any reasonable definition of the word. He consistently depicted Irish Americans as ape-like brutes and Catholic Bishops as crocodiles while promoting the fake news that there was a Catholic conspiracy to take control of the United States.

Some try to defend Nast, saying he wasn't prejudiced, just using the political cartoonist’s weapon of caricature against the Irish as supporters of the Democratic party and policies he took issue with. The problem with this creative excuse is the evidence of Nast's work.

While Nast was unsparing in all his caricatures, only the Irish were depicted as feral beasts; even his nemesis Boss Tweed was consistently shown as human. Thomas Nast had an unequivocal prejudice against the Irish that no amount of academic sophistry can camouflage

This raises the question of why Nast is given a pass when he is guilty of the same charge of "portray[ing] people in ways that are hurtful and wrong"? At the same time that Dr. Seuss is being expelled from popular culture, the Massachusetts Historical Society is running a feature "Thomas Nast: A Life in Cartoons", which perpetuates the Nast myths without touching on his bigotry.

Similarly, the Macculloch Hall Historical Museum in New Jersey, which claims it has the most extensive collection of Nast works, likewise avoids mentioning his prejudice on their website. In past years, there were efforts even to elect Nast to the New Jersey Hall of Fame.

How can we ostracize Dr. Seuss for depicting Chinese Americans with conical hats and chopsticks while honoring a man, at times using terms boarding on hagiography, who depicted Irish Americans as drunken apes?

Unfortunately, Nast is emblematic of a continuing double standard when the target of defamation is the Irish. It is the same double standard where Amazon CEO Jeff Bezos can virtue signal on tolerance and diversity as he (quite rightly) announces pulling items for sale that other heritages find offensive while leaving items emblazoned with "Irish Livers Matter," "Irish Today, Hungover Tomorrow," and a "Drunk O'Meter" where the maximum level of intoxication  is "Irish."

The inherent problem with intellectual boycotts is that they must be applied uniformly and fairly; otherwise, they devolve into expressions of prejudice that its proponents claim to be fighting. When used selectively, it creates a more persistent strain of bias: when we have a culture of removing/canceling  items because they are offensive except when they target one group, it validates the offensive message directed at that group as acceptable and accurate ("We remove things that are offensive stereotypes, this item targeting the Irish was not removed; therefore it is not offensive and not a stereotype.")

As Irish Americans, we should never seek to be treated better than anyone else. However, we should challenge why offensive ethnic stereotypes directed at our heritage are condone (and in the case of Nast, their creators lauded) in a way that would be unthinkable if another ethnicity was similarly targeted.  Diversity and respect should not be a case of "No Irish Need Apply."

*Neil Cosgrove is the Ancient Order of the Hibernians National Anti-Defamation Chair.