When orange and green couldn’t be seen in Northern Ireland

How two men, lifelong friends despite being born on opposite sides of the political divide, easily managed to defeat the odds all their lives in Co Fermanagh in Northern Ireland. 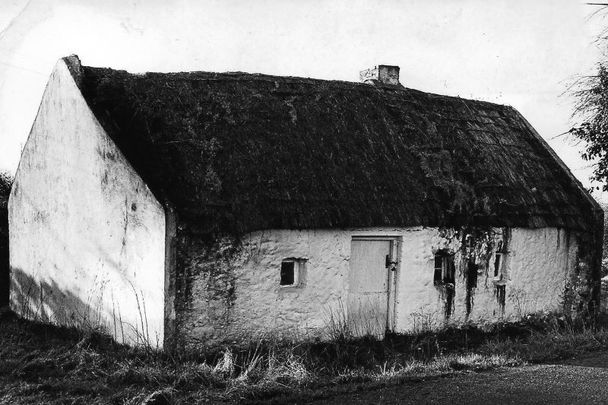 A cottage, not Sandy or Bob’s, that stood in Toneyloman, Co. Fermanagh. Cormac McConnell

Welcome. My annual spring hibernation being over, I paid a fleeting visit a few days ago to my birthlands in Fermanagh, where everything has drastically changed since I was last there more than 30 years ago.

The family home, which incorporated our father Sandy's country shop, has been swept away by roadworks, and the lovely cottage of his friend Bob Armstrong is now derelict and abandoned. I hardly knew where I was as I stood there silently with tears in these old eyes that don't shed tears too often at all.

However, the visit yielded the kind of heartwarming yarn which we can all do with in these terrible times, and which I hope ye will relish during a period when the Northern Ireland Protocol is again jangling in the global headlines.

Because it tells how two lovely men, Bob and Sandy, lifelong friends despite being born on opposite sides of the political divide, easily managed to defeat the odds by cannily using their backdoors and the cloak of darkness for all their lives in Toneyloman.

Ye should be aware of their realities back then. Both knew they could not attend each other's funerals in their sharply divided churches when that time came.

Both knew that Bob, a staunch Orangeman, could never be seen shopping in Sandy's very green shop, and both knew they could not be seen socializing in public. Yet, via their back doors and the cloak of darkness, the pair of them defeated the so-called protocol.

A few examples tell it all. When the new English monarch inherited her throne, one of Sandy's wholesalers presented him with two filled tea caddies bearing her image and that of her duke. Tea was still rationed in that postwar period, but Sandy used the back door and the night to present them to Bob in his kitchen.

Bob would have responded with one of the many bottles of stout they shared down the years, and the queen and duke were given pride of place on the mantlepiece over the hearth. They were there during all my boyhood years. They could never have been placed on our green mantlepiece alongside a picture of the fierce rebel Owen Roe O'Neill and the Sacred Heart and suchlike.

Bob, a farmer, was a drummer in the local Orange band, practicing hard at this time of year for the July marching season and marching almost every evening. They would play extra loud and long outside Sandy's shop always just to let the Papishes know who was boss whilst, at the same time, we were looking after Bob's feisty little Ayrshire cows in the byre. That was how I learned how to hand milk a cow and feed them and dung out the byre!

But it was not one-way traffic at all. Bob was our barber you see, and we would sit in a chair below that young queen and he would unerringly deliver a short back and sides in minutes.

He was a bachelor but his housekeeper Meta Rooney would comb our hair when he had finished. Then she would say, "You're grand now. You look like a little Protestant,” whilst our Papish locks were sizzling in the hearth. I remember that like yesterday.

We did not have a car. Once Sandy, who was crippled with arthritis, wished to go to Dublin for a cure featuring some kind of gold injections. No problem for those good friends.

Once again, under cover of darkness, Bob drove him to Dublin and they shared a bedroom in a B&B on Talbot Street. Sandy often told us afterwards that Bob prayed a lot longer at his bedside than he did when giving thanks for the injections which eased his pain for years afterwards. Again they returned home in the dead of night and nobody knew anything about that trip.

I said Bob could not be seen shopping in Sandy's shop. They had a way around that too.

He would come in through that backdoor after the shop was closed for the night and tell us what he needed and we would get it for him as Sandy and himself drank their bottles of stout and chatted about everything but politics. Our big wooden cradle was on his side of the hearth and he would rock whoever the occupant was at the time during the chat.

On a whimsical note, we boys were rocked so much he created Ireland's first rock and rollers because, when later on in our beds, we would rock our heads from side to side on the pillows and sing the sort of songs Orangemen would not approve of!

I was the first of the clan to leave home, going to join a paper in Roscommon. I went out that backdoor the night before I left to say goodbye to Bob and Meta.

He ordered me gently to never do anything that would hurt my parents and to be aware of the dangers associated with strong drink. When we shook hands before I departed there was something in his hand which I discovered later was a five pound note. That was a significant gift at the time for sure.

I never saw him again because I rarely returned to Fermanagh after crossing the border into Roscommon. Sandy died before Bob and, of course, he was not able to attend that funeral in a Catholic chapel. But then those lovely canny men had always known that would happen.

Standing in my birthlands a few evenings ago, quite deeply moved, I figured there is no difficult protocol of any kind in paradise and beyond reasonable doubt, those lovely old friends are together up there drinking their bottles of heavenly stout and talking about everything but politics.

I'm getting a bit maudlin so I'll quit here. Regards to you all until our paths cross again.