Ireland has grabbed the mantle of good sense and sensibility when it comes to vaccination. 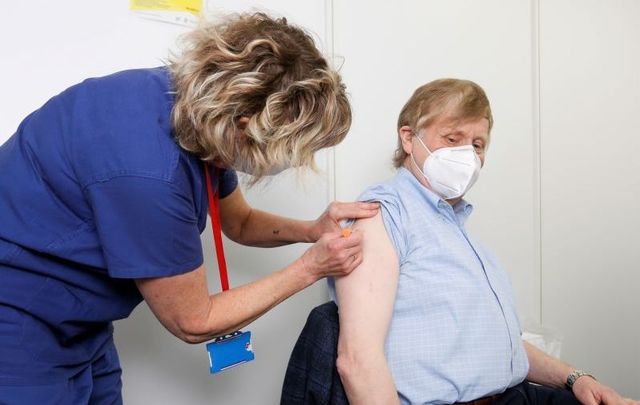 April 4, 2021: Jerry Leahy is given their first dose of the Covid-19 vaccine by nurse Margaret Dobbin at the HSE Vaccination Centre in the Aviva Stadium. RollingNews.ie

It seems Ireland has run short of crazies, as Irish Times columnist Fintan O’ Toole recently noted. In fact, they are the sanest race in Europe,

Germany, Belgium, and Holland figures show from the beginning that only 60 percent or so of their citizens intended to get the Covid-19 vaccine, while France was a laughable 48 percent.

Only six percent of the Irish are hard-core anti-vax nutters who vehemently oppose ever getting the vaccine but the numbers for Germany, France, and Belgium are all in the twenties. In other words, 20 percent of those populations say they will never be vaccinated.

Of course, Ireland compares very favorably with the United States where the numbers actually vaccinated fully are just around the 50 percent mark. One in five Americans state baldly that they will never get a vaccine.

Why do Irish people trust their government much more? It is clearly a political reality that Irish politics is not nearly as polarized as in other countries.

The policy platforms of the leading parties range from soft left to soft right and the choice of government is often referred to as one between Tweedledum and Tweedledee.

In fact, Dum and Dee got together in the shape of a coalition government for Fianna Fail and Fine Gael after the last election. Sinn Féin are on the left but well within the European mainstream.

On the vaccine, all the parties have all spoken with one voice and pushed hard for shots in arms and, despite setbacks, it seems that strategy is working.

Contrast the political moderation on the vaccine to the situation in America where some Republicans have gone all out to politicize and demonize the vaccine program and you get a clearer picture of the situation.

But the U.S. is not alone. France is laughably anti-vaccine, forcing draconian measures such as blocking access to all government buildings to those unvaccinated. Germans are justifiably nervous of government power after their little adventure with Naziism during the lifetime of many Germans still alive today.

So context helps. As O’Toole wrote, “Ireland is running low on loopers [crazies]. If we don’t watch out, we could emerge from the pandemic with our reputation for wildness completely shredded. We are in danger of being exposed as the sanest people in Europe."

He added: “We’ve had a test of our collective capacity for reason and of our acquired resistance to hazardous nonsense. We’ve passed it with considerable honor.”

It is gratifying, indeed, and does not gel with the usual Hollywood portrayal of the wild Irish and their eccentric ways.

Instead, the country has grabbed the mantle of good sense and sensibility and made it their own.

*This editorial first appeared in the July 28 edition of the Irish Voice newspaper, sister publication to IrishCentral.