New Year’s Eve 2020 marked the 63rd anniversary of the deaths of IRA volunteers, Sean South and Fergal O’Hanlon, during an attack on an RUC barracks in Co Fermanagh. 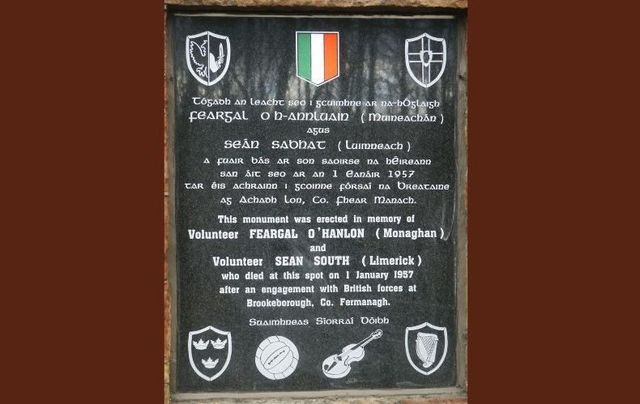 A memorial to Sean South and Fergal O'Hanlon at Moane's Cross in Co Fermanagh. missfitzphotos / Attribution 2.0 Generic (CC BY 2.0)

Like Kevin Barry, the two murdered volunteers, Sean South and Fergal O'Hanlon, became incredibly famous in death due to two ballads written about them: “Sean South of Garryowen” and “The Patriot Game.”

“Sean South of Garryowen” was written by Seamus O Dufaigh a week after his death, to the tune of a previous rebel ballad, “Roddy McCorley.”

“The Patriot Game” was written by Dominic Behan, brother of Brendan. It is a more complex song.

Of the two, “Sean South” is more popular. It is sung before and during Glasgow Celtic soccer games in Scotland. The Limerick hurling team, which won the 2018 All-Ireland final, sang it in the dressing room after the game. The song is known by millions of Irish and was allegedly even sung by British spies who learned the song for cover.

Sean South remains an enigmatic figure in Irish history. Somewhat like his hero, Patrick Pearse, he was a loner, deeply religious, and posthumously accused of fascist tendencies that are utterly unproven.

He was not born in Garryowen, a famous Limerick neighborhood. He came from Henry Street in Limerick.

A committed Irish language scholar, very few knew South had joined the IRA which was about to start its ill-fated border campaign in the 1950s which targeted police and army in border areas.

Along with South, was Fergal O’Hanlon who had not “just turned 16” but was close to 19. From a very strong Republican family, his involvement in the IRA was hardly surprising as he lived very close to the border in Co. Monaghan.

The night of the operation, the men met up in O’Hanlon’s house where the young volunteer told his mother she might never see this group again.

O'Hanlon's sister Pádraigín Uí Mhurchadha described the scene: "I remember Fergal, on the night, saying to my mother, ‘These men, give them a good meal because there are faces here tonight you won't see again.'

"Now it turned out that he happened to be one of the men that she would not see again."

The “Sean South” song begins, “It was on a dreary New Year's Eve, as the shades of night came down. A lorry load of volunteers approached a border town.”

This is exactly what happened. The unit, actually led by veteran republican Sean Garland, hijacked a lorry outside the town of Brookeborough in Co. Fermanagh and headed straight for the Royal Ulster Constabulary (RUC) barracks in the town to blow it up.

Arriving outside the barracks, South and O’Hanlon and another volunteer were to blow open the doors of the barracks using explosives and grenades to destroy the building.

But the explosives failed to ignite and the grenades bounced back out of the windows, and one exploded instead under the truck.

The RUC was alerted by the commotion, and Sergeant Kenneth Cordner unleashed machine-gun fire as the IRA members tried to escape. South was very badly injured and close to death by the time he was loaded into the truck, while O’Hanlon was bleeding badly from leg wounds.

The IRA unit made its escape, but they had to abandon South and O’Hanlon in a cow byre as they jettisoned the truck.

By then, the RUC and British Army had sent a huge party in pursuit. They found South already dead and O’Hanlon dying. Some have always claimed they let him bleed to death, but that has never been established.

The IRA group eventually evaded all pursuit and crossed the border to safety. The mission had been an abject failure, but 20,000 showed up at South’s funeral and a similar number at O’Hanlon’s.

Then came the ballads that wrote the two men into Irish history forever.