St. Patrick’s Day memories of a picnic in a 1960s storm in Ireland

A rain-swept St. Patrick's Day picnic in Bettystown when we learned perseverance and went home wet, cold, but strangely happy. 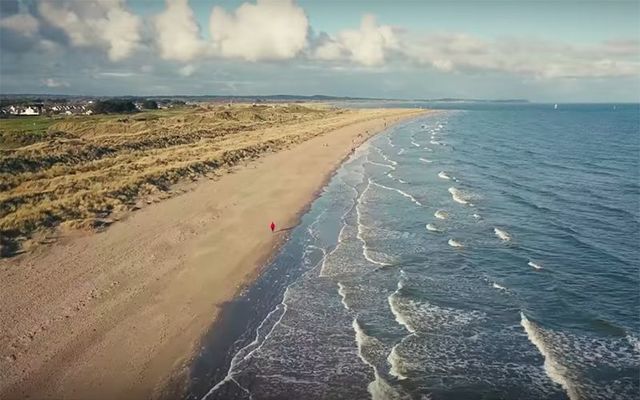 The beach at Bettystown, Co. Meath.

A rain-swept St. Patrick's Day picnic in Bettystown when we learned perseverance and went home wet, cold, but strangely happy.

My abiding memory of St. Patrick’s Day is not marching, bur rather picnicking in a pounding rainstorm.

In Ireland of the 1960s St. Patrick's Day was a religious one with very little razzle and dazzle to it.  You pinned a mini harp and Tricolor on the lapel of your best and only suit and you went to Mass.

You sang along with the lovely old hymn “Hail glorious St. Patrick, dear saint of our isle/On us your poor children bestow a sweet smile.”

The procession was after Mass, a walk through town with the priest leading in fine array holding a statue of Patrick. We followed along dutifully, boys mixed with girls casting lingering glances at each other. It was rare we were in mixed company.

When the procession ended it was an anti-climactic moment, especially for the adults. The pubs incredibly were closed until the early 1970s so families dispersed home.

There was one sporting highlight, the Railway Cup, Irish football and hurling matches between the four Irish provinces, Leinster, Munster, Connacht and Ulster.

Crowds would flock to Croke Park, the honor of being picked for your province not just your county was a major achievement.

One year Des Foley, a Dublin player, was picked on both the Leinster hurling and football team and starred in both matches played one after the other.  Lionel Messi had nothing on Des after that.

Another year in particular also stands out.  My father arranged a picnic on the beach at Bettystown, a lovely little coastal town six miles away.  Quite why he did it in mid-March when the weather could be as treacherous as mid-winter escaped me.

Off we went in a country bus, all nine of us, seven children two adults. There was only one other passenger who eyed us with deep bemusement as the rain ran in rivulets down the windows and this mad family of mine was clearly going on a picnic.

It was lashing, it was flooding, it was pouring. Even the cats and dogs stayed indoors.

My mother had diplomatically proposed we stay home. After all, we were already drenched after the little St. Patrick's procession through the town.

No such concerns for my father, a stubborn Kerryman.  He glommed onto the weather forecast that rain would give way to finer weather spreading from the west.

Back then the forecast was as reliable as a tinker’s promise but undaunted we pressed on.

There are wonderful walks and back then even a hotel where on very rare occasions we dined. The local shop that sold rich, creamy ice cream cones was a favorite destination. It was shuttered tighter than a drum skin this St. Patrick’s Day.

On the beach the wind howled like a banshee, the rain pelted down, the beach was entirely deserted but for the weird O’Dowd family who soon set about preparing the picnic.

The flasks of sugary hot tea were quickly downed. I disappeared under a plastic overall and began reading a book I had brought until my father decided it was time for a walk.

Walk we did along a windswept strand, the Irish Sea lapping in the distance and visibility about five yards as the rain fell sideways.  After the walk, we packed up and went home.

All these years later no memories of other early St. Patrick’s days linger, but the rain-swept picnic in Bettystown is as fresh as yesterday’s memories. We went home wet and cold but strangely happy.

We had managed to survive and learned a good lesson from my father that sometimes you must persevere no matter what. Those were the days, my friends.

Keep up-to-date with everything to do with St. Patrick's Day here