Why Scorcese’s The Irishman disappoints

Am I the only one who didn't really like The Irishman? 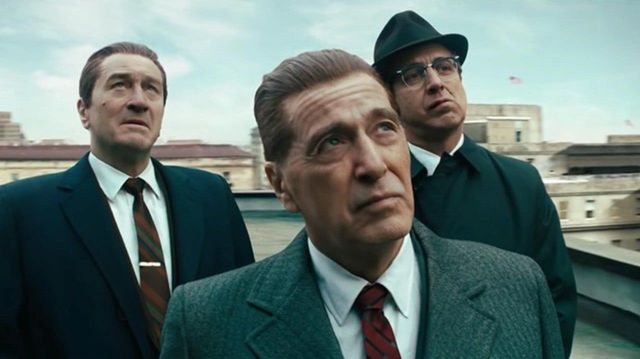 Robert DeNiro, Al Pacino, and Ray Ramano in The Irishman.

I blame my over the top expectations for a movie that was hailed from pillar to post as the best Martin Scorsese film ever and quite possibly one of the greatest movies of all time. The all-star cast, Scorsese directing and the worldwide hype ensured no movie in years was as eagerly awaited.

Add in the mix the gimcrack Irish gangster Frank Sheeran who gave the movie its name, and it seemed a recipe for a great movie night.

Read more: My dad’s alive and well again in The Irishman movie

So when it finally got to Netflix on Thanksgiving Eve I was ready for a night of mayhem, murder, conspiracy, betrayal, and insight into the ever-fascinating mind of top gangsters, and all based on a true story if the moviemakers are to be believed.

Alas, three hours and 30 minutes later, The Irishman left me stone cold when compared to Taxi Driver or Goodfellas.  In fact, I doubt if I’d put it in my Top 10 Mafia movies.

Goodfellas, with its highly charged plot and superb non-de-aged actors was exciting, and De Niro as Irish gangster Jimmy Conway was incandescent, his greatest performance since Taxi Driver.

I was expecting Goodfellas, Godfather-type genius dripping with atmosphere, plot twists and great acting, but The Irishman was leaden in comparison.

Maybe it was because the anti-aging gimmick so widely praised as a new de-aging process did not work for me. Al Pacino, not far from 80, looks way too old to be Jimmy Hoffa who is in his fifties when the film opens.  De Niro is unmatchable as an actor, but even he can't get away with being 30, 40, or 50 when he's well into his seventies.

Al Pacino and Robert DeNiro in The Irishman.

He definitely flunks the younger look test when walking. The Irishman costume designer Sandy Powell said the secret of de-aging is “head up instead of forward, shoulders back instead of rounded, even walking on your toes more than slumping.  It’s just sort of a lighter walk. Swinging your arms—if you have a swing in your arms when you walk, it makes you look younger.”

De Niro walks like a gnarled 76-year-old does when trying to look like he’s 40 which creates a very odd cadence.  Only Joe Pesci, who plays a Mafia boss, convinces as to truly living out the character.

Pesci is undoubtedly helped by the fact that for most of the movie his character, mob boss Russell Bufalino, looks close enough in age to him.  To my mind, he stole the movie as a result.

Joe Pesci in The Irishman.

But the aging actors issue was not the only problem I had with The Irishman.  The plot barely skirts what would be the greatest story of the 20th century, the assassination of President Kennedy.  There is a veiled reference to it by Bufalino that the Mafia did the deed, but in I Heard You Paint Houses, the book the movie was based on, Frank Sheeran delivers rifles to mysterious figures just before the assassination.

The book also traces Jack Ruby's links to the mob and his desperation to kill Lee Harvey Oswald who was his willing stooge many believe.

Yet the movie skips over a completely legitimate angle given Sheeran’s statements. Who shot Kennedy is a much larger issue than who killed Jimmy Hoffa, yet the whole question is ducked.

I’m not saying the movie should have been about Kennedy’s death, but it certainly was sold short in comparison to how it was covered in the book.

The last 45 minutes of The Irishman is a dreary expedition into musings on old age and death that could be shortened by 40 minutes, but I’m sure nobody was going to tell Scorsese to cut.

If it was any other director or cadre of actors The Irishman would probably have been a decent hit, but with all the legends signed on Nirvana was expected. Alas, it never reaches the height of the hype.

What do you think? Are you one of the 26 million who've watched The Irishman? Would you give it thumbs up? Let us know in the comments section below.