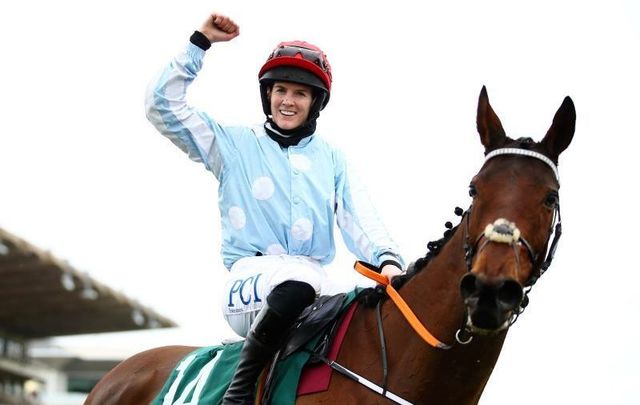 *Editor's Note: This column first appeared in the March 31 edition of the Irish Voice newspaper, sister publication to IrishCentral.

Most stories out of Ireland these days are frankly depressing, with the latest pandemic setbacks dominating the news.

Which is why I wanted to highlight an untold story in America of an extraordinary young woman called Rachael Blackmore who has become a household name in Britain and Ireland because of her horse racing exploits.

The 31-year-old from Tipperary is that very rare bird, a woman jockey in an overwhelmingly male-dominated world --and an incredibly successful one.

She has broken through in incredible fashion by becoming the leading rider in Britain and Ireland, and her six victories at the annual Cheltenham racing festival have now become the stuff of legend.

Every year the mecca of national hunt racing (racing over steeplechase fences and hurdles) is the Cheltenham Festival, four days right around St. Patrick’s Day of undiluted madness, good cheer, and gambling. Cheltenham is located among the rolling Cotswold hills 90 miles from London and is one of the great sports events in the world.

Over 250,00 spectators over four days attend, at least half of them Irish. The streets and pubs and hotels are packed in normal years, the card games are legendary and the sense of Irish craic is everywhere.

Corals, the British bookmakers, estimate $1 billion is spent on gambling over the four days. There is over $1 million in prize money every day. A winner at Cheltenham is every punter, owner, jockey, and trainer’s dream.

Blackmore had six this year. She won the second biggest event of the meeting, the Champion Hurdle, and came second in the Gold Cup, the premier prize in horse racing over fences.

She became an overnight sensation in a game where females are usually found mucking out barns and grooming horses, not going head to head with the top male jockeys in the world.

Instead, Blackmore was galloping thoroughbreds at 35 miles an hour, leaping fences five feet high and fending off rivals again and again on her spectacular week.

Her six winners included three Grade One races, and she was also top jockey for the festival. Before the meeting started she was 12/1 to win that title. Not for the first time she confounded the experts.

Her mother, Eimir Blackmore, a schoolteacher, was interviewed by The Guardian and said, “It’s been an absolute fairytale. It’s incredible … my phone has literally melted.”

Her daughter’s extraordinary success “has given people a bit of a lift at this awful time.”

Blackmore herself could hardly believe what had happened.

“It’s phenomenal. I can’t even comprehend being leading jockey at Cheltenham. That’s crazy,” she said.

The day after Cheltenham her fellow jockeys formed a guard of honor when she walked to the parade ring at a small racing venue in Ireland. It was the ultimate acknowledgment by her own people of the extraordinary achievement.

Now there is a heavy burden on her. Horse racing recently underwent a deeply troubling time when a top Irish trainer, Gordon Elliott, was pictured sitting on a dead horse while taking a phone call.

It was a horrific image that shocked not just the racing world. Respect and love for horses run very deep in Ireland and the picture gave racing a huge black eye.

Blackmore may have arrived in the nick of time to save racing’s image.

As The Guardian wrote, “She has such resilience and resolve it is almost certain Blackmore will not crumble in the face of her new role as the apparent savior of jump racing.”

Meanwhile, Ireland has a new and surprising hero. Rachael Blackmore is a name to remember.