Pope Francis calls for "civil union law" for same-sex couples within the Catholic Church in the new documentary "Francesco." 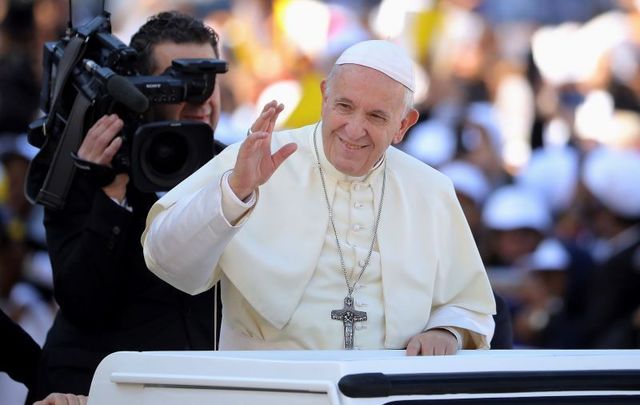 Pope Francis has signaled his support for same-sex couples within the Catholic Church.

Pope Francis has again done the almost unthinkable. This quiet revolutionary has shown goodness towards and understanding of same-sex couples in a world where the Catholic Church has often demonized them.

The pope’s support of civil unions places the Catholic Church in the modern era and, hopefully, holds out the promise of acceptance of same-sex marriage soon.

The Pope's support of civil unions for same-sex couples emerged in the documentary "Francesco," which debuted on October 21 at the Rome Film Festival and is set to debut in North America on October 25.

According to the National Catholic Register, the new documentary "discusses the pastoral outreach of Pope Francis to those who identify as LGBT, including a story of the pontiff encouraging two Italian men in a same-sex relationship to raise their children in their parish church, which, one of the men said, was greatly beneficial to his children.”

In the documentary, the Pope says: “Homosexuals have a right to be a part of the family. They’re children of God and have a right to a family. Nobody should be thrown out, or be made miserable because of it."

He further said: “What we have to create is a civil union law. That way they are legally covered.

One can imagine the conservatives in the Curia and here in the US choking on their cereal over breakfast when they read the words of Francis.

The chance of a schism, a breakaway Conservative faction, could well occur. Pope Francis has really opened the doors and taken down the barricades to LGBT people.

One wonders what Pope Francis’ predecessor Pope Benedict, a notoriously orthodox figure, will make of his successor’s bold move.

There are many here in the US, especially former St Louis Archbishop Cardinal Raymond Burke, who may well consider drastic action against Francis as they have made clear their antagonism to the pope’s liberal agenda.

That is for the future, right now we have an act of spellbinding courage by Francis to accept the outsider. He has truly proven to be a pope unafraid to challenge long-held doctrines.