Niall O'Dowd on being the keynote speaker at Washington Association of New Jersey's annual luncheon, where he launched his latest book "George Washington and the Irish." 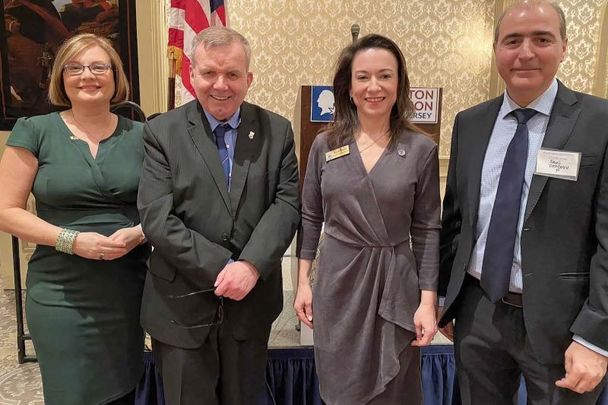 On President’s Day I found myself in company with perhaps the greatest president of all, George Washington.

Well not exactly George Washington, but a man decked out as Washington who does a very passable imitation of America’s first president.

It was in Morristown, New Jersey, now an attractive suburban town of some 22,000 citizens but much more famous, of course, as the winter halting camp of Washington and his men in 1779/1780 where they spent months battling the most extreme weather conditions ever experienced in the Northeast.

The Ford Mansion where Washington himself was billeted is now a major tourist attraction and national monument. Every year for 148 years, the Washington Association of New Jersey has held its fundraising luncheon on President’s Day to ensure that this and future generations will always remember the heroic father of the nation.

With so much history attached to the town and the museum, it was a great honor to be asked by the Washington Association to be keynote speaker and launch my latest book, George Washington and the Irish, available from Amazon on March 1 and in bookstores.

My wife and I were deeply touched by the warmth and goodwill towards the Irish we encountered everywhere. Sometimes you need to get outside the New York bubble to appreciate just how many are so proud of their heritage.

My talk honed in on the remarkable accomplishments of so many Irish in the U.S. Revolution, and I stressed that like the Irish in the American Civil War, we had been written out of history.

We rarely hear of heroes like Hercules Mulligan, who was Washington’s top spy in New York and who saved Washington’s life on two occasions. Hercules was so good that many years later, CIA chief Bill Casey said he deserved his own statue outside CIA headquarters as he was the best American spy ever.

How did he do it? Read the book!

Nor have we heard much about Derry native Charles Thomson, who came to America as one of seven children accompanying their father. Alas, their father died before reaching land, leaving the children orphaned.

Despite such a dreadful start to life, Thomson became a hugely successful businessman and then secretary to the Second Congress, an office equivalent to House speaker in modern times.

It was Thomson who was delegated to ride from New York to officially inform Washington he had been elected as president. What a moment for him.

Then there are the two extraordinary St. Patrick’s Days that were held in the camp. In the first year, the Irish soldiers claimed some German battalions were mocking them and there was a near-riot until Washington personally jumped in.

On the second St. Patrick’s Day, Washington gave the soldiers their first day off in months, and he himself held two functions marking the day.

There are many such stories in my new book, and we could not have gotten a kinder reception from the Washington Association and its members.

There were close to 200 at the lunch, one of the largest crowds in years, attributable to the blessed end of Covid and folks able to mingle again. It was also great to see Irish Consul General Helena Nolan and her husband Sami in the audience.

In addition to taking part in the luncheon, we also visited the incredible Knights of Columbus building on South Street in Morristown which has many extraordinary historical artifacts and paintings.

Everywhere we went we felt very welcome, and people seemed deeply interested in the Irish angle to George Washington. I was just happy to be part of such a warm and friendly community if only for a short stay, but I will certainly return.

"George Washington and the Irish: Incredible Stories of the Irish Spies, Soldiers, and Workers Who Helped Free America" by Niall O'Dowd is available on Amazon here.