"Thirty years ago this week, in December 1987, the Irish Voice became the first new weekly Irish American newspaper to stick around since the Irish Echo was launched in 1928." 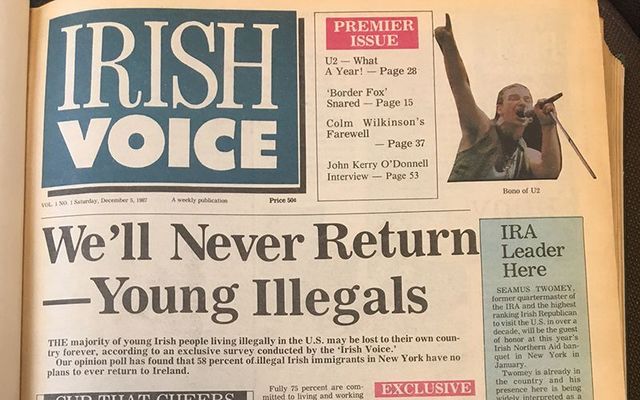 The first ever Irish Voice newspaper.

Thirty years ago this week, in December 1987, the Irish Voice became the first new weekly Irish American newspaper to stick around since the Irish Echo was launched in 1928.

It was a special moment, but when the presses started running at Evergreen Printers in Belmar, New Jersey on a wet December evening we faced an uncertain future from the get-go, the 1987 financial meltdown very much on people’s minds.

Black Monday was October 19, 1987, when the Dow plunged and business confidence was shattered as a result.  There was even talk of postponing the launch of the Irish Voice, but we plunged ahead, arguing as I would today that there is never a good or bad time, there is just a time, so do it.

So a weekly new ethnic newspaper was launched, facing long odds as many Irish businesses were impacted, especially the hospitality sector, by the crash.

We sailed on undaunted, driven by two issues that recur to this present day: the plight of the tens of thousands of Irish undocumented which was peaking at the time, and the ever-present Northern Ireland troubles.

I'm sure if you asked me then which issue was more likely to be solved I would certainly have plumped for illegal immigration, yet here we are with a bumpy but durable peace in Northern Ireland and the illegal issue dominating the political landscape, especially driven by President Donald Trump during his election campaign.

Incidentally, if you had told me that day in December that Donald Trump, the vacuous, ego-driven gossip staple of New York would become president, I would have recommended psychiatric help.

Our credo was get involved, take stands, no “on the one hand or the other” stuff.  Irish Voice right or wrong would not sit idly by.  We became heavily involved in the issue of immigration and played our part in the Morison and Donnelly visas which relieved many of those who were undocumented.

One of the great stories was watching the dream unfold and the massive crowds turning up at Merrifield Post Office in Virginia to deliver their Morrison applications. It was a scene like no other, seeing the desperate hope written on so many faces that their names would get chosen, and thankfully tens of thousands were.

On the North we championed the first U.S. visa for Sinn Fein leader Gerry Adams, were part of the insider Irish American group that brought it about and stood amazed when Adams stepped off a plane in February 1994 in New York. We knew nothing would ever be the same again and it wasn’t.

There were two overwhelming moments I can remember at the Irish Voice, one when a member of staff investigating the selling of babies in America discovered she had a full sister in Texas.

Another was the saddest story I've ever covered, a young Irish construction worker hanging himself in a park in the Bronx with a few pennies in his pocket because fellow Irishmen had exploited his labor and never paid him.

Then there was the Internet, the 900-pound gorilla that came us and every other publication in the world. I think we adapted better than most, the IrishCentral site with 4.5 million visitors testament to that.

But there has been one constant for the last 26 years. Debbie McGoldrick the editor has guided the Irish Voice through very crisis and twist and turn. And yes, dear reader, I am married to her.

She and John Dillon put together our signature event, the Irish Legal 100, 10 years ago.  When you see a hundred or so lawyers and judges at the residence of the Irish ambassador in Washington for the event, including the Chief Justice of the Supreme Court John Roberts, and travelers from as far away as Alaska and California, you understand the power of the brand.  That’s all down to John and Debbie.

So here’s to the next 30 years and thanks to you the readers, advertisers, writers – including our two originals, John Spain and Cormac MacConnell – for all the support.