Similar to Morocco's World Cup team, Ireland has welcomed players who are not quite top-class in their home countries as "prodigal sons." 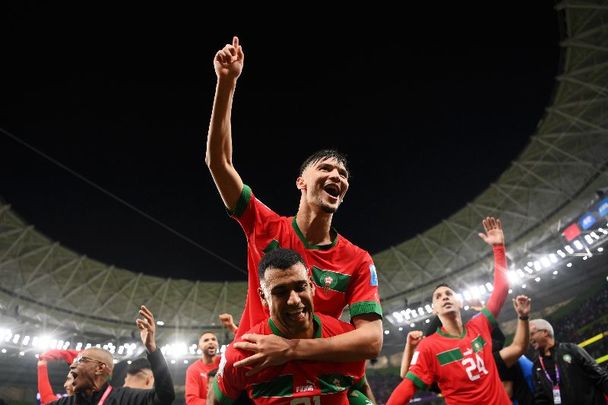 December 10, 2022: Achraf Dari and Walid Cheddira of Morocco celebrate after the 1-0 win during the FIFA World Cup Qatar 2022 quarter-final match between Morocco and Portugal at Al Thumama Stadium in Doha, Qatar. Getty Images

There is no doubting the Cinderella story of the 2022 World Cup. The glass slipper goes to the North African nation of Morocco.

If you bet at the beginning of the tournament that Morocco would outlast giants such as Brazil, Holland, Spain, England, Germany, and Belgium, you would have got 1000-1 odds or thereabouts – and a recommendation to see a psychiatrist.

It simply doesn’t happen at the business end of World Cups where the traditional powers take over and the minnows are devoured when the real football begins. But this year, all hail Morocco who have broken through for the African worlds.

Morocco has rarely been on the world map, save those legendary scenes from "Casablanca" when Rick (Humphrey Bogart) laconically tells the piano player to “play it again, Sam.”

Morocco were knocked out of the World Cup on Wednesday night following a 2-0 defeat against France, but their performance in the semi-final, as in the entire World Cup, has captured the hearts of people around the world.

The entire Arab world was swept up in the fervor and used every chance possible to cheer for the downtrodden Palestinians. That is why it is so puzzling that it is the Palestinian flag, not the Moroccan, that is being waved all over on the Arab streets.

The Irish abroad can also relate to another phenomenon, the fact that only three players out of the Moroccan team panel of 25 which is setting the soccer world alight were born and raised in that country.

That shows, once again, the importance of the global diaspora. Morocco has no professional league to play in that comes remotely even close to La Liga in Spain or the English Premier League.

As a consequence, the vast majority of the players are born outside the country but declare for Morocco which gives the team great depth. Ireland once had a similar scenario, players not quite up to top class in British teams but welcomed as prodigal sons as soon as they signed for Ireland.

The British got wise, however, and began protecting their players from Irish intrusion. Worse, they have been beating Ireland at their own game. Two of the English panel members, Declan Rice and Jack Grealish, were recruited for England despite having come up through the Irish system.

The result has been a very disappointing Irish Republic national team which did not come within an asses roar of qualifying for Qatar. There is no Irish player on Manchester United, Liverpool or playing with a major team on the European continent.

In fact, fickle Irish fandom has now switched to the Republic’s female Irish team who broke all records to qualify for their first World Cup in Australia next year. So down under next summer, you will hear the thunder and “The Fields of Athenry,” the anthem of Irish everywhere.

I'm not sure we will hear the chant “Up the Ra” which got so many knickers in a twist after the ladies sang it when they won qualification.

But in the end, it will be about the team, not the rebel song. As Qatar will soon fade in the distance, chants for the “Girls in Green” will soon begin.