The Football Association of Ireland violated "the basic rules of decent conduct" with the women's team "Up the Ra" chant, UEFA said when announcing its fine. 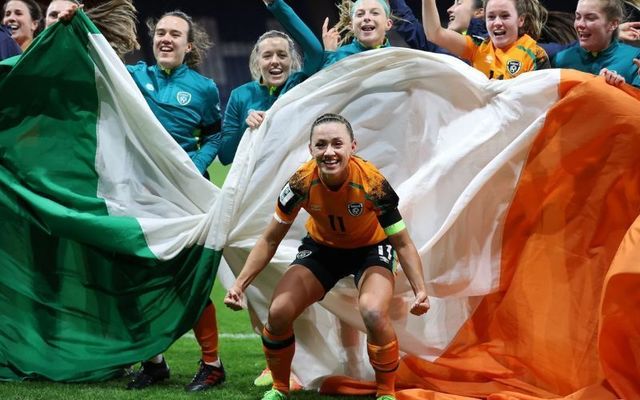 The Football Association of Ireland (FAI) has been fined by European soccer's governing body UEFA after the Irish women's team was filmed singing "Up the Ra" following their World Cup play-off victory against Scotland in October.

The Football Association of Ireland has been fined €20,000 "for the violation of the basic rules of decent conduct," UEFA's Control, Ethics, and Disciplinary Body announced on December 8.

The decision comes after an investigation was mounted by a UEFA Ethics and Disciplinary Inspector after Ireland's women's team was filmed singing "Up the Ra."

In response to the fine from UEFA, FAI said in a statement on Thursday: "The Football Association of Ireland notes and accepts the sanction by the Control, Ethics and Disciplinary Body of UEFA following UEFA's independent investigation into a potential breach of UEFA’s Disciplinary Regulations.

"The FAI and the Republic of Ireland Women’s National Team has apologised to all affected by events after the 2023 FIFA Women’s World Cup Qualifying Play-Off against Scotland in Hampden Park in October.

"The FAI has assured UEFA that all players and staff across all of our international teams have been, and will continue to be, reminded of their responsibilities every time they represent their country.

"The FAI will be making no further comment on this matter."

In October, a video of the Irish women's team singing the "Up the Ra" chant went viral on social media after Ireland booked their place at their first-ever Women's World Cup with a 1-0 win over Scotland on October 11.

The chant is the chorus of the popular  Wolfe Tones song "Celtic Symphony," which was written by Derek Warfield in 1987 to commemorate the centenary of Scotland's Celtic Football Club.

After the controversy kicked off, members of the team issued apologies. Aine O'Gorman said: "We sang 100 songs last night and that was the one that went out. We would just like to apologize to anyone who was offended."

Chloe Mustaki also apologized for the team's "lapse of judgment."

Speaking to RTÉ, the team's manager Vera Pauw insisted: "The values that we carry is that we have respect for everybody.

"The first meeting with the players was about having respect, that's how we work."

She added: "We're sincerely and deeply sorry for what happened and it doesn't matter if the players meant anything or not, because they didn't mean anything, because it was a celebration.

"That doesn't mean they should not realize what they were doing.

"And also, not to put it on social media, if it's in a private room it should not happen either, because of having respect for everybody, respect for the history.

"Your freedom ends where you go into the freedom of somebody else.