"If you don’t like a song then don’t listen," The Wolfe Tones said after the Irish soccer team faced controversy for singing "up the 'Ra," a lyric from the band's song "Celtic Symphony." 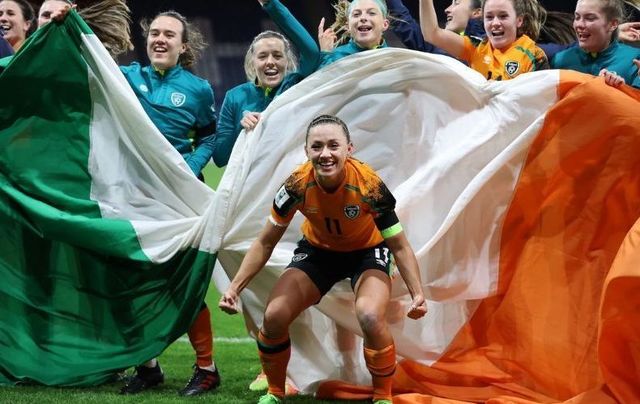 The Wolfe Tones have defended the Irish women's soccer team after they were filmed singing "Ooh aah up the 'Ra" from the Irish band's 1987 song "Celtic Symphony" on October 11.

"If you don’t like a song then don’t listen to it but don’t try to stop others from listening to it," The Wolfe Tones said on Twitter on Wednesday, responding to the controversy.

‘If you don’t like a song then don’t listen to it but dont’t try to stop others from listening to it.’ - Brian Warfield

On Thursday, as "Celtic Symphony" surged to the top of iTunes charts in both Ireland and the UK, The Wolfe Tones said: "Let this be the answer to those who try to control what we sing and we cannot sing … Let The People Sing!"

Let this be the answer to those who try to control what we sing and we we cannot sing … Let The People Sing!! pic.twitter.com/I1zh5pTA8M

The Wolfe Tones were responding after video of the Irish women's soccer team singing "up the 'RA" in their backroom after beating Scotland to secure a place in next year's World Cup went viral.

Brian Warfield, the writer of "Celtic Symphony" and frontman for The Wolfe Tones, told the Irish Times: "What the hell is wrong with IRA?

"It is the Irish Republican Army. It is the people who put us here and gave us some hope when we had no hope."

Warfield, a native of Dublin, described critics of "Celtic Symphony" as "cranks and unionists or people who side with them."

The 76-year-old said he penned the "Celtic Symphony" in 1987 for the centenary of Scotland's Celtic Football Club, which occurred a year later. The song references graffiti he saw in Glasgow which said: "We're magic, up the Celts, ooh, ahh up the Ra".

He added that song was not necessarily a reference to the Provisional IRA.

Warfield said critics of "Celtic Symphony" had no problem with "God Save the King" even though it honored King Charles III, who was honorary colonel of the Parachute Regiment when it shot 13 civilians dead in Derry on Bloody Sunday in January 1972.

"There were terrible things that happened on both sides," Warfield said, "but don’t give me the argument that it was one-sided.

"Don’t tell that you can’t sing 'Celtic Symphony' but you can sing 'God Save the King.' Don’t give the argument that 'Land of Hope and Glory' isn’t a rebel song. It is.

"In England, they wear poppies and rise them up to sir this and sir that for killing for English expansionism but to kill to gain Ireland’s freedom is a terrible crime."