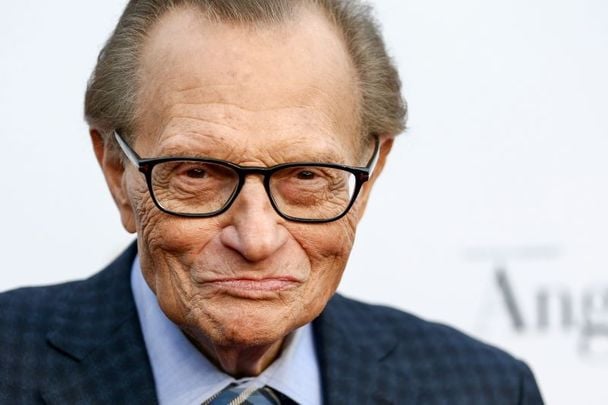 The great Larry King passed at age 87 on January 23, 2021. His important role in ending the censorship of Sinn Féin in Ireland and Britain should never be overlooked.

While he was an unlikely messenger, King’s interview with Gerry Adams in February 1994 shattered the conspiracy of successive Irish and British governments to keep Adams and other Sinn Féiners off the airwaves.

Section 31 of the Irish Broadcasting Act forbade any interviews or appearances on state-run media which heavily predominated at the time. The act came into being in 1971 just as The Troubles were starting to explode.

Sinn Féin was considered so dangerous that the British followed suit, banning all interviews. But in a Monty Python touch, actors were allowed to mouth the same words Gerry Adams, Martin McGuinness or other spokespersons had actually said.

One of Adams’ funniest lines was that when the act was lifted, the poor actor who imitated him was essentially out of a job.

Despite massive anti-censorship protests, the Section 31 edict held and Sinn Féin were essentially voiceless on state radio and television.

Until Larry King, that is.

In February 1994, Irish American pressure on the new Clinton administration yielded rich fruit when President Clinton overruled his advisors and granted Adams a 48-hour visa to come to America for the first time. The British were furious and tried every trick to get the permission overturned, but failed.

Adams himself later noted that the move by Clinton made the August 31, 1994 IRA ceasefire, the turning point in the Northern Ireland Troubles, possible.

Adams traveled to America and received a hero’s welcome.  But there was also intense media interest.

There was no doubt who was monarch of the media at the time, the irrepressible King, whose nightly mix of news, infotainment, and suck up interviews was a huge rating success for CNN.

King was a walking talk show himself, a former delivery boy, married eight times, twice to the one woman, a fixture on the gossip pages who had been bankrupted twice through gambling addiction.

King apparently personally demanded his staff get in touch with Adams after he saw the blazing headlines in The New York Times and numerous media outlets.

Thus it was that Adams, head of Sinn Féin, alleged senior IRA figure, found himself as the major guest on an episode of Larry King Live after the visa had been granted.

The occasion was historic for another reason too. The British were going postal. They understood perfectly what was about to happen.

Their ridiculous ban would be exposed for what it was when King, who was carried on all the CNN world outlets, began beaming into British homes.

Watchers would (gasp!) hear the voice and see the person of Adams live on TV.

Of course, that was immediately what happened, with King throwing puffball questions at Adams that must have made the British cringe.

Likewise in Ireland, where Section 31 has cast a pall for decades over free speech and legitimate inquiry, the King interview changed everything. Once Adams became a worldwide figure, which King had instantly made him, the bans were exposed as sheer nonsense.  They were both dropped soon after.

King went on to score another scoop on a subsequent Adams U.S. visit when he persuaded Ulster Unionist MP Ken Maginnis to share a TV studio with Adams, the first-ever public Sinn Féin/Unionist encounter.

So King belongs in the Irish history books alongside martyrs and heroes for creating one of the biggest breakthroughs of The Troubles by getting Sinn Féin back on the air. For that alone, he deserves an Irish salute.