Just when you thought things could not slither any lower another scandal erupts... That is not John McCain’s Washington. 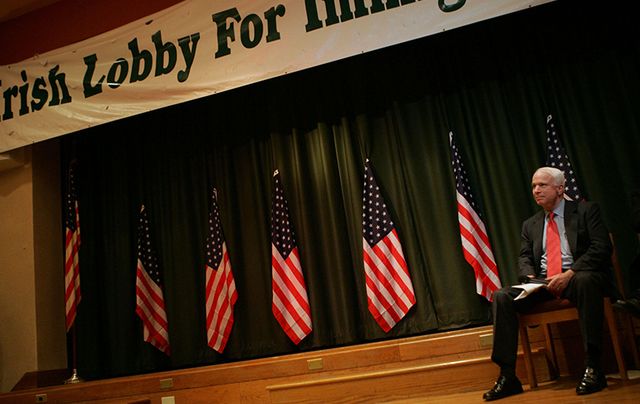 The family of Senator John McCain has announced that he will not be continuing with medical treatment for cancer.

The news that John McCain has a serious brain tumor was a blow to those of us who long for the day that a McCain-type Republican Party – run by cool heads, and clear minds and compassionate hearts – takes shape. Today, that blow hit even harder as the Senator's family announced that he is to discontinue treatment.

"The progress of disease and the inexorable advance of age render their verdict. With his usual strength of will, he has now chosen to discontinue medical treatment," they said.

I love my husband with all of my heart. God bless everyone who has cared for my husband along this journey. pic.twitter.com/v27sEbboii

We can continue to dream of his Republican party. You know, the type of party that would not deny 32 million Americans health insurance so they could gift the rich big tax breaks.

You know the kind of party where a prominent Trump supporter,  Diana Orrock, a national committeewoman for the Nevada GOP, shared a story about John McCain headlined “Please Just F‑‑‑ing Die Already.” and wrote “Amen” in her Twitter feed.

Right now we have the fever swamp that is Trump’s Washington with deadlock, gridlock, arm lock and leg lock everywhere.

Just when you thought things could not slither any lower another scandal erupts.

That is not John McCain’s Washington. I still think Trump’s lowest blow was to question John McCain's courage in Vietnam. Trump proclaimed he was not a hero after surviving five and a half years of torture.

I know John McCain from interviewing him and dealing with him directly on the immigration issue. He is a bona fide hero and a proud Scots Irishman who loves his roots. He was the first Republican to show an interest in Irish issues at the presidential campaign level, appearing at an Irish presidential forum in 2008 in Scranton.

I love @SenJohnMcCain. Unbeatable, unbreakable. He's Teddy Roosevelt's "man in the arena" even when we're on opposite sides. God bless. pic.twitter.com/0sBY4QynWp

Then there is the war hero. The wounds that he suffered during his capture were horrific and the torture he endured in the notorious 'Hanoi Hilton' was beyond savagery and cruelty – it was downright sadistic. He refuses to discuss them.

John McCain is an American hero & one of the bravest fighters I've ever known. Cancer doesn't know what it's up against. Give it hell, John.

He came through it like a hero and has been one ever since.

He has been one of the very few to take issue with Trump on immigrants from Mexico and whether they are all rapists and criminals.

He feels the immigrant dilemma deeply, having been in the Arizona desert where he saw the dead bodies of women and children desperately seeking a new life, as he told us when we met him.

The Irish Lobby for Immigration Reform, which I co-founded in 2005, linked up with McCain on the immigration issue after 2005. 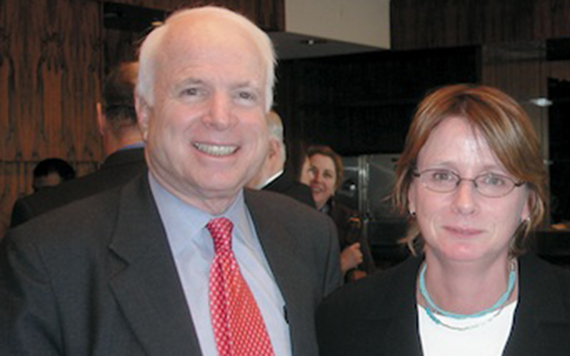 We hosted him several times and he spoke at immigration rallies in The Bronx for us and in Washington DC.

He was a hero then and now. I have watched backstage as an aide had to comb his hair and button his jacket. He cannot do those things for himself due to having his shoulders broken during torture.

Yet he never complained, was always courteous to a fault. He is privately very witty and not at all ego-driven. And a hero.

Tinpan Trump is none of those things. He took $20 million his father gave him and turned it into a fortune. Easy to make a big fortune when you start with a small fortune.

Now he is playing at being president, this preposterous show-boater with the id of an oversize gnat and the ego of a Paris Hilton.

John McCain reflects everything great about America after giving it a lifetime of service. I can only hope and pray he wins this bout against cancer like he has won every other tough battle in his life.

It is a tough fight, it is the same type of cancer that felled Ted Kennedy and Beau Biden. McCain will not lack for courage.

Trump reflects himself in a trick carnival house mirror – big, bloated and out of control. McCain reflects the best of America.