Comprehensive immigration reform is dead - the Irish need to work with Trump's plan. 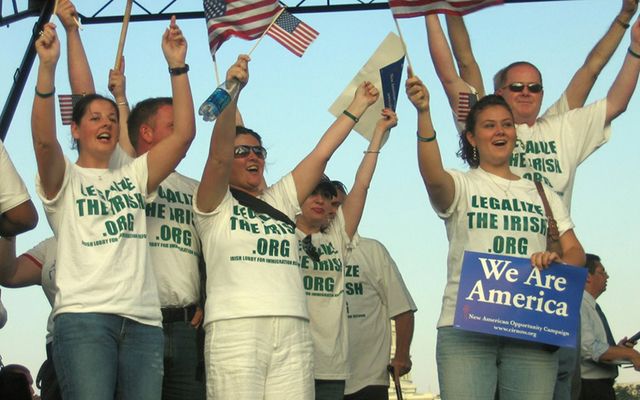 Campaigners rallying in 2007 for comprehensive immigration reform: It's time for the Irish to go it alone. Irish Lobby for Immigration Reform

Did you know approximately 143,500 Irish-born people live in America down from 250,000 in 1980? In a few years because of immigration restrictions, there will be none.

Annie Moore from Cork, the first person off at Ellis Island will turn in her grave.

What are the Irish communities in the US going to do about it?

First, we must face reality. Comprehensive immigration reform is dead. It is time for the Irish to unhitch their wagon from that particular dead horse.

Second, there are significant positives in Donald Trump’s new immigration plan and the Irish need to work with it.

Third, the best hope for Ireland is a go-it-alone strategy.

In a week when New York Times columnist Ross Douthat called out the left on its continued obsession with not appearing racist on immigration, it is time we all embraced a new reality.

Douthat wrote: “...liberalism has gone a little bit insane on immigration, digging into a position that any restrictions are ipso facto racist, and any policy that doesn't take us closer to open borders is illegitimate and un-American."

Hear hear! The left has lost its way on immigration. Britain, Australia, Canada all favor English-speaking graduates who immediately contribute to the economy. Trump is merely suggesting the same priorities for the United States.

"There are significant positives in Donald Trump’s new immigration plan."

Currently, America is continuing its immigration obsession of family reunification, prioritizing even immigrants' adult brothers and sisters living abroad whose visas take up to 12 years to process. The system is absurd and broken.

Ireland is one of the countries most badly affected. The Irish simply cannot immigrate legally to the United States. Yet, if we say that we are accused of overlooking other countries' needs and breaking the compact on comprehensive reform for all.

If the election of Donald Trump clarified one thing it was that Americans have no appetite for comprehensive immigration reform – quite the opposite.

We need to talk about the 1965 Immigration Reform Act and how it betrayed the Irish, one of the founding groups of this country who contributed mightily to its success (read Washington's St. Patrick’s Day message to his Irish troops if you need convincing or Lincoln kissing the Irish flag at Harrison's Landing after the Irish Brigade fought fearlessly for him.)

Yet we have been essentially excluded from America since 1965. We get one fifth of one percent of the million green cards a year. Somehow, if you lobby for the Irish it makes you an odd person as if you are not supposed to lobby for your own people but instead lobby for work visas for every country on earth.

Consider this, Australia did some smart lobbying a few years back and got 10,500 visas a year for themselves – all on their own. Google the term "E3 visas” if you don't believe me. How many Australians fought with Washington, gave their blood in foreign wars, died to preserve the Union?

The Irish government has been trying hard, but the effort needs a new intensity and focus which I believe should be an E3 visa scheme for Ireland which would re-establish the links between two countries forever bound together by history.

We should use the Trump proposals as a starting point. Unless we do this, soon enough an Irish-born man or woman will be as rare in America as hen’s teeth. It is not good enough.

Niall O'Dowd was interviewed on this topic, on the Sean O'Rourke show, on RTE Radio 1 this morning. You can listen back to the interview, from 1 hour 06.35 minutes into this podcast.