Hillary Clinton should have showcased Dan Rooney like Obama did

Former President was effusive in his praise of the Pittsburgh Steelers legend. 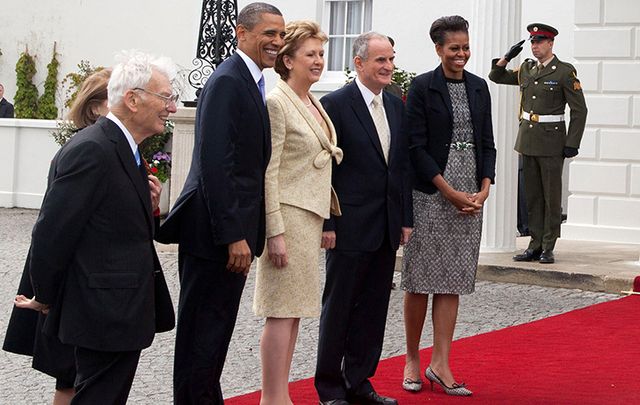 Dan Rooney, the Obamas, the former President of Ireland Mary McAleese and her husband Martin at the Áras an Uachtaráin.

Barack Obama was effusive in his praise of Dan Rooney, the Pittsburgh Steelers legend who passed away yesterday at the age of 84, and well he might have been.

In a very significant way Obama owed his White House success to the quiet-spoken man he later named ambassador to Ireland where he served three memorable years.

Indeed, it is arguable that if Hillary Clinton had such a giant as Dan Rooney front and center in her campaign in the key states like Pennsylvania, Michigan and Ohio she might well be sitting in the White House now.

Rooney gave Obama credibility with the group of voters he had the greatest difficulty siding with him – the working class Catholic vote.

Pennsylvania, as it was for Clinton, was a must win state but Rooney was missing in action. Hillary’s brain trust went for Bruce Springsteen and Beyoncé.

Barack Obama had called on Dan Rooney, patriarch of a great working class Irish family that had risen all the way to the top and a daily mass-goer and communicant, a man whose family name was synonymous with decency, commitment and hard work.

“Although the Rooneys are not the wealthiest family in Pittsburgh, many in town consider them the most powerful. When Dan Rooney, a lifelong Republican, endorsed Barack Obama for president last spring, it gave Obama a needed boost in western Pennsylvania. Even though his endorsement infuriated a vocal contingent of Steelers fans, Rooney continued working for the campaign, accompanying Obama to meet with steelworkers.”

Yes, Rooney was a one-time Republican, but “He loved how enthusiastic young people were getting for him (Obama), and when you get to my father’s age, you start to hope the future is bright for generations beyond,” Jim Rooney said in the Post-Gazette story. “Obama, to my father, was just so fresh.”

As the Post-Gazette noticed, Rooney and Obama bonded at a 2008 campaign stop. "The whole time, Obama spoke to my father. I mean meaningful conversations about different things. There was a bond there, and you could see the development of mutual respect. My father really appreciated that. That day, he announced his support."

Later, in October, Rooney presented Obama with a black Steelers jersey, something that undermined the efforts of Rooney's son Jim who wanted "to keep his father's support for Mr. Obama from carrying the Steelers' imprimatur." Many fans were annoyed, but Dan Rooney was not to be shaken.

Rooney as the principal owner of the Steelers was a god-like figure in western Pennsylvania and he helped Obama to a ten-point winning margin statewide on election day 2008.

Who knows if Hillary, who only lost Pennsylvania by 44,000 votes, would have pulled out a victory if the Rooney family had been very visible?

Little wonder that Obama profusely praised the man who became his champion in his hour of need in the most critical swing state.

“Dan Rooney was a great friend of mine, but more importantly, he was a great friend to the people of Pittsburgh, a model citizen, and someone who represented the United States with dignity and grace on the world stage,” Obama said.

“I knew he’d do a wonderful job when I named him as our United States Ambassador to Ireland, but naturally, he surpassed my high expectations, and I know the people of Ireland think fondly of him today.

“And I know the people of Pittsburgh, who loved him not only for the Super Bowl championships he brought as the owner of the Steelers, but for his generosity of spirit, mourn his passing today. Michelle and I offer our condolences to the Rooney family, some of the most gracious and thoughtful people we know – even as we celebrate the life of Dan Rooney: a championship-caliber good man.”

The feeling was mutual. In an op-ed piece for the Post-Gazette upon his resignation, Rooney wrote: “I have had a lifelong commitment to advancing the relationship between the American and Irish people and building peace on this beautiful island, but I came unexpectedly into politics and diplomacy. It has been an honor and privilege to represent President Barack Obama and the United States of America as ambassador to Ireland.”

Now if Hillary had realized the importance of showcasing a devout Irish Catholic as a key supporter, who knows what might have happened? As it turned out, she spent just 35 minutes in April 2016 with Rooney during her campaign, too little and far too early on to make a difference.