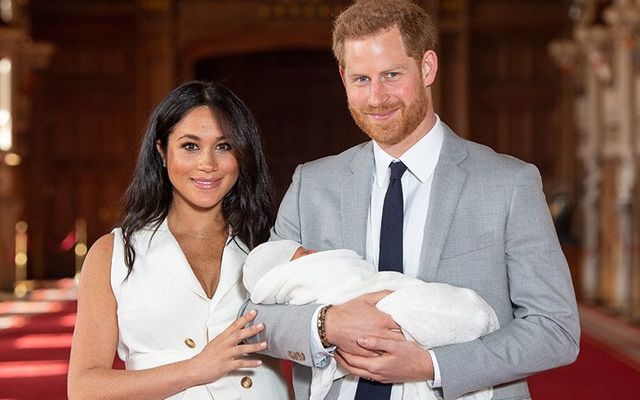 The Duchess and Duke of Sussex, Meghan Markle and Prince Harry with their new son, Archie. Getty

By choosing a German name for their child Harry and Meghan revive bad memories of the Royal family Nazi links. We should remember that such links were also evident among American and Irish sympathizers

So Archie will be the official name of the royal baby, a clear tip of the hat to the German origins of the Royal Family. The full name Archibald means "very bold” in German. It was certainly very bold to call the new baby a good German name.

Of course, the Windsor dynasty is originally of German paternal descent and was a branch of the House of Saxe-Coburg and Gotha before changing to Windsor during the First World War when German connections were severed.

A fan of the Royals celebrates the arrival of baby Archie.

The German link is once again perpetuated in the new royal’s name. It is not exactly a glorious history. The new royal’s great grand uncle Edward VII was an avowed Nazi.

Harry once dressed up as a Nazi for a fancy-dress ball. Incredibly, the outrage really surprised him.

The furor over a very young Queen Elizabeth giving the Nazi salute at the behest of her uncle, the notorious pro-Nazi, should be no surprise. Let us not forget Edward VII married the divorcee Wallis Simpson also a happy heiler of Hitler.

In 1937, the Duke and Duchess visited Nazi Germany, against the advice of the British government, and met Adolf Hitler at his Obersalzberg retreat. The visit was much publicized by the German media. During the visit the Duke gave full Nazi salutes.

Good show. The Royal Family Nazi sympathies were well known. Prince Philip, Elizabeth's husband, had sisters who married German Nazi sympathizers and he was suspected of liking them too.

In the present generation Prince Harry, of course, thought nothing of dressing up as a Nazi at a fancy-dress party in more recent times.

But let’s not get too high and mighty here. The Irish and US had pro-Nazis in key positions too, Charles Lindbergh in the US most notably and in Ireland none more than Charles Bewley Irish Ambassador to Berlin in the key period leading up to World War II.

Bewley made "no attempt at hiding his virulent anti-Semitic and pro-Nazi outlook,” saying “where they exist in any quantity, the Jews are regarded as an alien body."

He blocked any efforts to have Ireland take in Jewish refugees. He told the Irish government that he was unaware of any cases of "deliberate cruelty" towards Jews by Hitler's government or any episode that "could even be remotely compared with the atrocities" of the Communists in Spain or Russia, the English in Palestine, or the Black and Tans.

"It is thus claimed that during the War [WWI] German Jews in the vast majority acted against the interests of Germany, and that, as soon as England had definitely espoused the cause of Zionism, they worked for Germany's defeat in the War."

German anti-Semitism was "comprehensible," he wrote when it was found that "the Jew had not only succeeded in avoiding military service but also in enriching himself during the agony of the country."

Charming. So, Ireland has its own Nazi skeletons rattling around too.

Read more: How Hitler’s henchman became an Irish farmer after the war