The major role of gay women in the 1916 Easter Rising

The incredible role that gay women played in the 1916 Easter Rising and how they were airbrushed out of history. 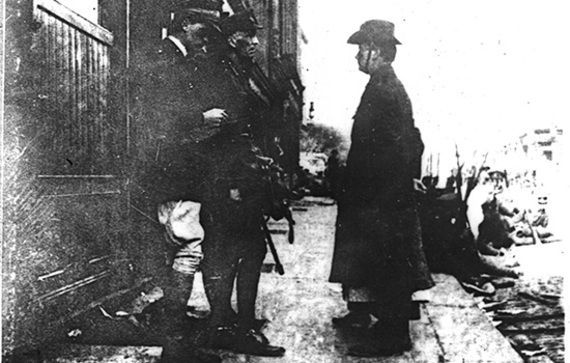 Airbrushed out: A famous photo of Pearse handing over the 1916 surrender, what we don't see is Elizabeth O’Farrell standing right next to him. NLI

An excerpt from IrishCentral founder Niall O’Dowd’s book A New Ireland, which tells of the incredible role that gay women played in the 1916 Easter Rising and how they were airbrushed out of history.

“The light of evening, Lissadell,

Great windows open to the south,

Two girls in silk kimonos, both

Beautiful, one a gazelle."

Yeats dedicated his poem “In Memory of Eva Gore-Booth and Con Markievicz” to two remarkable women who blazed a trail through Irish history, Eva Gore-Booth born 1870, and her sister, Constance—later Countess Markievicz—born 1868.

The historical accounts of the gay movement in Ireland usually omit women, yet they had a remarkable part to play in the 1916 Rising as just one example and as lifelong advocates for human rights as another example.

Mary McAuliffe, a lecturer in women’s studies at University College Dublin, points out that Elizabeth O’Farrell, who was famously airbrushed out of the historic photograph of 1916 commander Patrick Pearse surrendering to a British Army officer (only her boots are visible), was gay and had carried the flag of surrender at great personal risk to the enemy lines.

Nurse Elizabeth O'Farrell of Cumann na mBan, who delivered news of the surrender ending the 1916 #EasterRising died #OnThisDay in 1957 pic.twitter.com/2j5Fpgf6wH

McAuliffe told the Dublin Inquirer that Elizabeth O’Farrell and her fellow nurse Julia Grennan were a couple:

"These two rebels were based in the GPO on O’Connell Street during the Rising. They cared for the wounded, including James Connolly. After days of fighting, the rebels moved to Moore Street, where Pearse decided to surrender.

“When Elizabeth was going to bring out the surrender flag, Julia Grennan talks about the fact that she was terrified and anxious watching her step out onto Moore Street, where there were bullets whizzing around," says McAuliffe.

"The two women are buried together in Glasnevin Cemetery, and their gravestone reads “Elizabeth O’Farrell … And her faithful comrade and lifelong friend Sheila [Julia] Grennan.” [A very brave inscription for the love that could not speak its name.]"

In all, McAuliffe says seventy-seven women fought in the Rising, a huge number.

Of course the most famous was Constance Gore-Booth, who married a somewhat dubious Polish Count and became known as Countess Markievicz. Both Eva and Constance were born to privilege and wealth in Lissadell House in Sligo where the family home was a stately mansion that Yeats loved to visit.

Their father was the 5th Baronet, the equivalent of bearing a knighthood. He was often absent on Arctic explorations, and his five children were mainly left to their own amusement. Eva and Constance, however, are said to have been heavily influenced by a near Famine that struck in 1879 where they witnessed local tenants coming to beg for food at their doorstep. 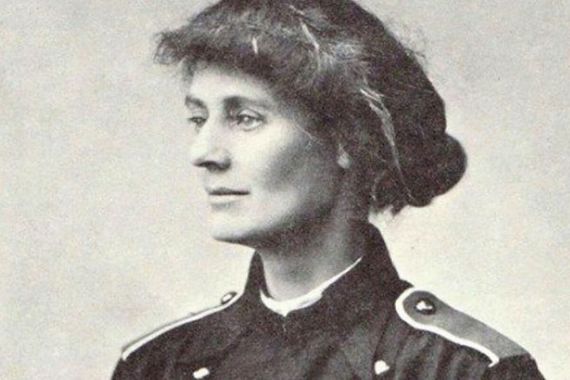 Constance channeled her energy into revolution, becoming a hero of 1916 and the first female in the Irish parliament. She achieved legendary status as a revolutionary later in life.

Eva went a different path; she made her home in London and channeled her energies elsewhere—she was especially motivated to work for the underdogs. Esther Roper, her companion, and lover, later remarked that Eva was “haunted by the suffering of the world and had a curious feeling of responsibility for its inequalities and injustices.”

She focused on women’s issues, especially the fight for universal suffrage and the right to vote. She was also a strong voice for sexual freedom and published a magazine that was scandalous given the tenor of the times. It was called “Urania” and most likely derived from a word meaning homosexual. It was published privately by Gore-Booth and featured progressive articles on topics like education mingled with photos of women dressed as men, and discussions on sex and gender.

The magazine went to her lesbian coterie with a circulation of about 250 copies. It was as revolutionary for its time as anything her sister achieved.

The 1916 Rising also featured other queer Irish women leaders. Dr. Kathleen Lynn was a member of the Irish Citizen Army, which fought in the 1916 Easter Rising. She was Chief Medical Officer in the General Post Office which was the location of most of the fighting during the 1916 Rising.

She was also a prominent figure in the suffragette movement. She described herself as “a Red Cross doctor and a belligerent” when she was arrested. She was imprisoned in Kilmainham Gaol with her comrades Countess Markievicz and Madeleine Ffrench-Mullan, the latter also a lesbian who fought bravely for her country.

Historian May McAuliffe says the love letters passed between Lynn and Ffrench-Mullan, who were both jailed for their roles in the Rising, demonstrated their love. “Then they spend their lives together,” says McAuliffe. “They lived together.” 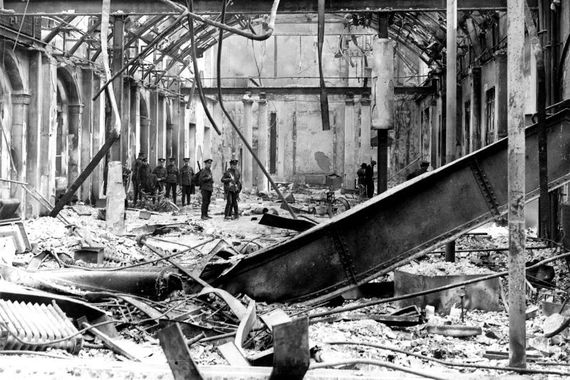 Inside the GPO after the Easter Rising rebellion

There had been attempts to criminalize lesbianism and make it illegal, but polite post prudish society never considered such acts were occurring. In 1921, British MPs attempted to add a clause to a new Criminal Law Amendment Bill being debated at the time, which would have made lesbianism into a criminal offense: “Any act of gross indecency between female persons shall be a misdemeanour and punishable in the same manner as any such act committed by male persons under section 11 of the Criminal Law Amendment Act 1885.”

However, this was ultimately dropped out of concern that legislation would only draw attention to the “offence” and “encourage women to explore their sexuality.” If you could imagine a gloomier place in the western world than Ireland for gays and lesbians for the twentieth century, it would have been very hard. The governing law dated from 1885 and it became known as the blackmailer’s act as gay people were especially vulnerable to being found out as Oscar Wilde found out.

As for women, the idea of lesbian love was so outrageous that it was not felt necessary to have a law against it. The right to gay marriage for either sex was as alien a concept as green men on Mars. The issue of abortion was never even spoken about.

*A New Ireland by Niall O’Dowd is available on Amazon.com and Barnes & Noble.