The two unexpected characters who took part in the 1916 Easter Rising at the General Post Office, in Dublin. 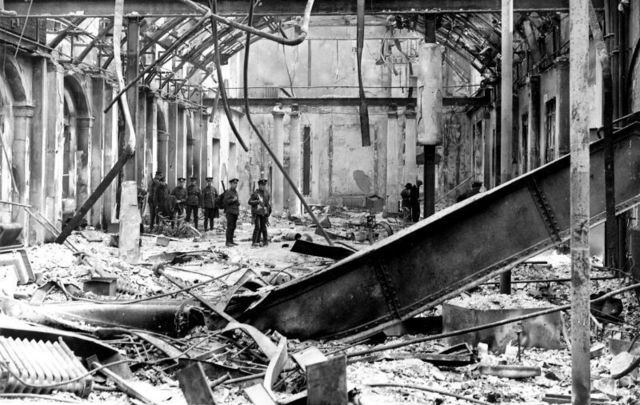 Soldiers survey the interior of the completely wrecked Post Office in Sackville Street, Dublin, during the Easter Rising of 1916. Getty Images

The two unexpected characters who took part in the 1916 Easter Rising at the General Post Office, in Dublin.

On April 24, 1916, Patrick Pearse stood outside the General Post Office in Dublin and read a proclamation announcing the establishment of an Irish republic under a provisional government.

Read More: The 1916 Easter Rising: A guide to the key figures, facts, and moments

The Irish Volunteers and Irish Citizen Army had taken up arms in an effort to secure a republic. While the vast majority of those who took part were Irish, there were two men who found themselves on the periphery of one of Ireland’s most monumental moments in history by accident.

The Volunteers had been infiltrated by members of the Irish Republican Brotherhood, which had secretly fixed Easter Sunday as the date for the Rising. One of the most remarkable tales is that of two seamen who just happened to be in the capital when the Rising erupted. These two ‘Irish rebels’ were unusual because of where they were from – Sweden and Finland.

One of the men called out to Captain Liam Tannam, who was in charge of some of the ground floor windows at the General Post Office. He recalled the chance encounter:

“There were two strange-looking men outside and I went to the window and I saw two obviously foreign men. Judging by the appearance of their faces I took them to be seamen. I asked what they wanted.

"The smaller of the two spoke. He said: 'I am from Sweden, my friend from Finland. We want to fight. May we come in?' I asked him why a Swede and Finn would want to fight against the British.

"I asked him how he had arrived. He said he had come in on a ship, they were part of a crew, that his friend, the Finn, had no English and that he would explain.

"I decided to admit them. I took them in and got the Swede a rifle, the Finn a shotgun. I put them at my own windows."

Read More: Timeline of Ireland’s 1916 Rising as it happened

This is how two foreign strangers became a part of the Irish identity, written into history.  However, the Finn’s inexperience with firearms quickly began to show. Everyone stood too when an alarm was raised at the barricades. The crisis passed, but as the Finn stepped back from the window his shotgun banged off the floor and went off. The blast hit the ceiling and sent a shower of plaster down on the men manning the windows. One of the volunteers, Joe Plunkett, was unimpressed and gave the Finn a piece of his mind.

Tannam continues: "The Finn looked at him [Plunkett], looked at me, at everyone. Joe said: 'Can you not talk, man?' The Swede spoke up and said: 'No. He has no English.' 'Who are you?', Joe said.  I intervened then and I explained to Joe. Joe looked at me and said: 'Amazing, but obviously that man there is a danger,' pointing to the Finn. 'We will have to get him another place out at the back of the Main Hall.'"

James Connolly said, “The man who fires a shot like that will himself be shot.” It was decided that the Finn should go back from the barricade to help with the filling of fruit tins with explosives and pieces of metal. The Swede insisted he accompanied his friend. Both men stayed for the week and were there until the surrender.

According to Liam Tannam, the Finn’s name was Tony Makapaltis, but that of the Swede was unrecorded. This incredible tale is among the many hidden secrets of what really happened during the 1916 Rising.

This story is credited to witness Statements of Liam Tannam, Charles Donnelly, and Robert Holland. You can read more about such tales at KnowThyPlace.