If the new POTUS were the “Siberian Candidate,” interested in bringing down the USA, he would be off to a great start. 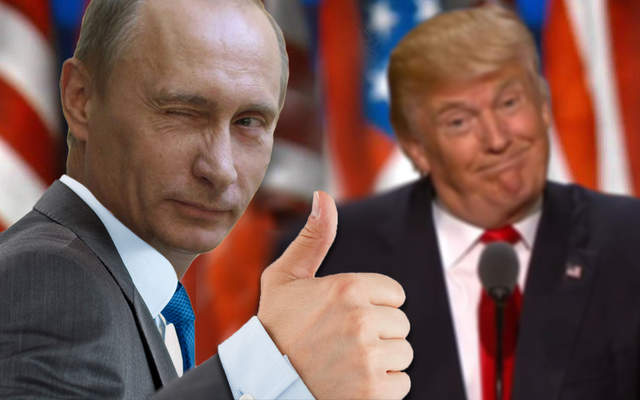 If Donald Trump were the “Siberian Candidate” interested in bringing down the United States, he would be off to a great beginning. Putin would approve - you know that guy who ordered precision bombings of children’s hospitals in Aleppo who Donald adores.

The Donald and he are talking today for the first time since the election Putin almost certainly influenced. Word is that Trump may drop sanctions. Perhaps he'll agree to stand by when the Russian bear mauls the Baltic States like he did Crimea.

A Quinnipiac poll yesterday showed Donald at just 36 percent, one week in office, ten points less than his winning 46 per cent. Being president is hard it seems for a 70-year-old real estate magnate with no political experience. Who knew?

No problem! Make an outlandish claim that between 3 and 5 million people voted illegally and announce a major investigation. Ignore the fact that even GOP leaders say there is no evidence.

Ignore the fact that the first person found double dipping, enrolled to vote in both Florida and New York, is your key aide Steve Bannon.

Also, find out that your own daughter, Tiffany Trump, and your new Secretary of the Treasury, Steve Mnuchin, your lady in waiting Kellyann Conway your son in law Jared Kushner are also able to vote twice.

- Try to destroy the credibility of the free press:

Slam them at every opportunity, imitate and ridicule a disabled journalist.

When they report from impeccable sources that your crowd was smaller than Obama’s first inauguration demand apologies, order an investigation, refer to yourself in the regal third person.

Early estimates put the crowd gathered for Trump’s inauguration at about one-third the size of Obama’s in 2009 https://t.co/v0rGLZv00N pic.twitter.com/97elpXg1CS

Slam the media at every turn seeking to blunt their inquiries.

- Announce you are dissing your neighbor, Mexico, your second largest trading partner and ally:

Do so when their president is about to visit give him no choice but to refuse to come. Ensure the worst relationship since President Polk declared war on Mexico in 1846. Bring back the "Ugly Gringo" image.

As Donald Trump orders a wall, fewer and fewer people are arrested at the US-Mexico border https://t.co/mHWURnq1QS pic.twitter.com/OCyTvcNmK6

Don’t inform your own cabinet members with responsibility for the wall about your decision. Ignore that eminent domain cases will tie up your wall in court for years, not to mention Indian reservation leaders will tell you that they will refuse to build a wall on their property.

Make sure, therefore, you are ensuring that undocumented immigrants will be afraid to report crimes such as rape and robbery committed against them. Ignore the overwhelming will of the voters in those cities that immigrants have those safeguards. Play the federal bully.

And an extra bonus. Compare yourself to President Lincoln after a week in office. That will win you credibility.

As Putin might say: "Da, a very good start Comrade Trump. And not even a week gone by....! "Na Zdorovje" (Cheers!)