Humanity and insight relevant to the US President today from the famed Irish writer who witnessed horrific treatments of children in Reading Gaol, during his own two-year incarceration. 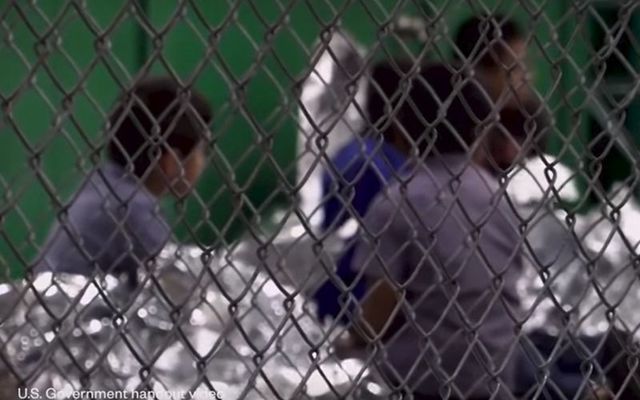 Children separated from their parents on the US Mexico border. US gov handout

Humanity and insight relevant to the US President today from the famed Irish writer who witnessed horrific treatments of children in Reading Gaol, during his own two-year incarceration.

During and after his own two-year incarceration (1895-1897) for “gross indecency,” ie homosexuality, Oscar Wilde wrote an extraordinary attack on the notion of taking children from their parents and locking them up alone in prisons and confined spaces. (Sound familiar?)

It was motivated by the horrific treatment that Wilde witnessed of children in Reading Gaol where he served his two-year sentence as prisoner number 4099.

The humanity and insight of Wilde, often mistakenly considered a frivolous writer, is fully on display. His words ring true today.

The letter to The Daily Chronicle could have been written to President Donald Trump, ICE and the Department of Homeland Security who took thousands of children away from their parents on the US Mexico border and incarcerated them. Babies, toddlers, teens it made no difference, they were shipped into camps some thousands of miles away from their parents and confined there.

Wilde’s outraged words could have been written today.

Here is an abridged version:

“I learn with great regret, through an extract from the columns of your paper, that the warder Martin, of Reading Prison, has been dismissed by the Prison Commissioners for having given some sweet biscuits to a little hungry child.

I saw the three children myself... but the little child I saw on the afternoon of Monday, the 17th at Reading, was tinier than any one of them. I need not say how utterly distressed I was to see these children at Reading, for I knew the treatment in store for them. The cruelty that is practiced by day and night on children in English prisons is incredible, except to those who have witnessed it and are aware of the brutality of the system.

The child consequently, being taken away from its parents by people whom it has never seen, and of whom it knows nothing, and finding itself in a lonely and unfamiliar cell, waited on by strange faces, and ordered about and punished by the representatives of a system that it cannot understand, becomes an immediate prey to the first and most prominent emotion produced by modern prison life–the emotion of terror. The terror of a child in prison is quite limitless.

I remember once in Reading, as I was going out to exercise, seeing in the dimly-lit cell, right opposite my own, a small boy. Two warders, not unkindly men, were talking to him, with some sternness apparently, or perhaps giving him some useful advice about his conduct. One was in the cell with him, the other was standing outside. The child’s face was like a white wedge of sheer terror. There was in his eyes the mute appeal of a hunted animal. The next morning, I heard him at breakfast-time crying and calling to be let out. His cry was for his parents.

This terror seizes and dominates the child, by whomsoever, it is inflicted.

In the case of the little child to whom Warder Martin gave the biscuits, the child was crying with hunger on Tuesday morning, and utterly unable to eat the bread and water served to it for its breakfast. Martin went out after the breakfasts had been served and bought the few sweet biscuits for the child rather than see it starving. It was a beautiful action on his part and was so recognized by the child, who, utterly unconscious of the regulation of the Prison Board, told one of the senior warders how kind this junior warder had been to him. The result was, of course, a report and a dismissal...

I know Martin extremely well, and I was under his charge for the last seven weeks of my imprisonment. On his appointment at Reading he had charge of Gallery C, in which I was confined, so I saw him constantly. I was struck by the singular kindness and humanity of the way in which he spoke to me and to the other prisoners. Kind words are much in prison, and a pleasant “Good morning” or “Good evening” will make one as happy as one can be in solitary confinement. He was always gentle and considerate.

It is that of the whole prison system—of the governor, the chaplain, the warders, the lonely cell, the isolation, the revolting food, the rules of the Prison Commissioners, the mode of discipline as it is termed, of the life …"

Wise words, ones that key members of the Trump administration should read sometime and reflect. We think we are better than our forebears wiser, more compassionate insightful. Recent events and Wilde’s letter prove differently. Separating children forcibly from their parents is horrific in any century.