Yes, President Trump, words can kill, we Irish know all about it

Donald Trump is America’s Ian Paisley, a powerful man with a bullhorn inciting, inviting and incensing followers about the targets of his attacks. 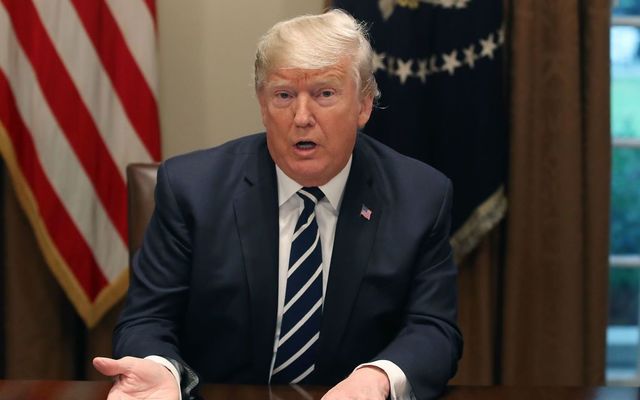 Let’s call a spade a spade. Words can kill. Praise violence when you have the biggest bully pulpit on earth and you damn sure can expect some crazies in your thrall to follow up.

Donald Trump is America’s Ian Paisley, a powerful man with a bullhorn inciting, inviting and incensing followers about the targets of his attacks.

Protestant rabble-rouser Ian Paisley became the critical figure around the fraught time before The Troubles started where calm and rational voices from leaders could have killed the roiling waters in Northern Ireland.

Paisley, at the time a firebrand preacher who loved nothing more than to inflame and arouse, caused the first great upheaval of The Troubles, the killing of an innocent Belfast barman Peter Ward while he was walking home in 1966.

Read more: Where does all this white hate come from? Maureen Dowd tells us where

He was killed by three men, one of them Hugh McLean, a UVF member who joined the paramilitary group after listening to the rabble-rousing speeches of Paisley. McLean later said he regretted that he had "ever heard the name of Ian Paisley or decided to follow him."

There were hundreds more, perhaps thousands who ended up in prison after hearing the incendiary words of Paisley. At one point he shouted out the names and addresses of Catholics living in a Protestant area. “Do you know who lives there? Pope's men, that's who!" he bellowed. A riot ensued and the three families were attacked and left homeless.

When I worked on Northern Irish issues I got to know a number of the Loyalist paramilitaries. To a man, they felt cheated and shunned by Paisley who roused them to violence then walked away and washed his hands of responsibility. The saving grace for Paisley was that he turned peacemaker late in life and revealed an entirely different dimension to himself.

Comes now Donald J. Trump who claims loudly his flame-hot rhetoric has nothing to do with the slew of violent incidents happening in America right now.

Trump can say there were good men among the Nazis in Charlottesville, refers to the bombing attempt against Democratic leaders with the word "bombing” in inverted commas, swears mightily he never rabble rouses through his inflamed speech but he cannot get away with it.

The man in the Trump van with the Fox stickers and sniper crosshairs on Hillary decal was disturbed anyway, Mr. President, but you may well have helped him over the brink. Several commentators have remarked how he worshipped you like a father figure.

Republicans are doing so well in early voting, and at the polls, and now this “Bomb” stuff happens and the momentum greatly slows - news not talking politics. Very unfortunate, what is going on. Republicans, go out and vote!

No, there are no false equivalencies. Democrats simply do not on a continuous basis seek to set alight the worst instincts of their followers.

The terrorists we have all been dreading are ourselves, they come from within our midst, not from a caravan or a Middle East hideaway. It is Trump's rhetoric which is helping enable them.

W.B. Yeats asked himself about his words written as a poet, asserting Ireland’s right to freedom then asked himself after the slaughter of the Easter Rising if he bore some responsibility.

I lie awake night after night

And never get the answers right.

Did that play of mine send out

You should ask the same question, Mr. Trump.