He was among the top public relations men in America employing over 1,200 staff worldwide but Irish-born Declan Kelly has had a catastrophic fall from grace. 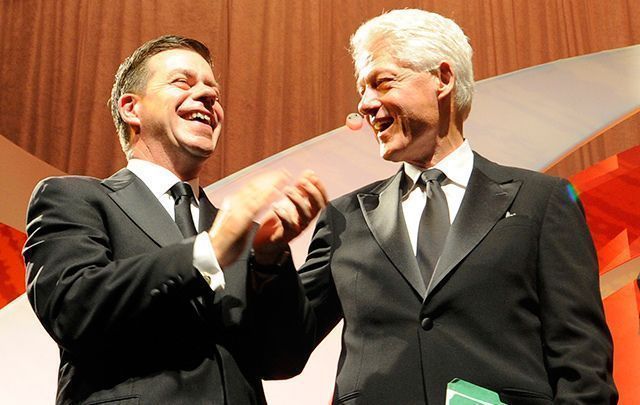 Declan Kelly's latest brush with notoriety, losing his board position at Global Citizen and apparently stepping back from his chairmanship of Teneo, the public relations company he co-founded, to seek counseling for an alcohol problem shocked those who have either worked or did business with him.

It is well known that Kelly, who is 53, will do almost anything to achieve his objectives in the business field, but there was never a hint of personal impropriety. If anything, he was seen as a control freak who kept a game face on at every event. Now allegations of harassment at a leading charity ball threaten his position.

The incidents occurred on May 2 during the Global Citizen’s Vax Live concert, which featured  Foo Fighters and Jennifer Lopez and was chaired by Prince Harry and Meghan Markle.

However, no one is writing off the Tipperary-born millionaire who quite recently paid $19 million for a Hamptons mansion only to discover the foundations were faulty. A court case against the surveyor is in progress. It might be somewhat symbolic of his current difficulties.

Kelly also hit the limelight when he was pictured at the Super Bowl in January 2020 fast asleep in the stands while on the field the Kansas City Chiefs overcame the San Francisco 49ers. That was more a fun item however and nothing as serious compared to what he faces now.

The news of his current difficulties, which was splashed across the Financial Times, was the most-read story in The Irish Times and was prominently reported on Page 6 in The New York Post.  It was an example of how well-known Kelly is in business circles both in America and Ireland and a backhanded compliment to a son of small farmers from Tipperary who climbed to the top of the public relations world in America employing 1,200 people at Teneo the PR company he founded.

(Full disclosure, I did business and was friendly with Kelly for many years, but we have not communicated for several years).

His bad behavior at the Global Citizen event was immediately owned up to and confessed which was a very smart move, but a lot of detail could still well come out.

In this era of “Me Too’ being publicly accused of harassment of women is not a very good look at all.

Whether any of the women will take the issue further remains to be seen but if you were a betting man, you would never have considered such an accusation circling around Kelly.

He was not known for philandering or disrespecting women but was known for a runaway ego,  ruthless business dealings, on the edge fundraising, and grabbing the limelight at every opportunity.

This is a man who kept two former presidents, Clinton and Bush, waiting until he concluded an endless speech; he also did the same with the then Irish leader Enda Kenny. When it came to being upfront and center in a room full of influential leaders, Kelly would give no quarter to anyone and always insisted on speaking in a central role.

He made a lot of enemies on his climb to power and there seems relatively little sympathy for him as a result.

He is taking the classic public relations angle, step back, seek counseling, return but whether it works remains unknown. The tough question for his partners is does his name now damage the Teneo brand rather than help it.

A big part of his reputation rests on his formerly very close relations with the Clintons when they were still near their zenith. He gained the Clinton’s confidence through inspired fundraising but post-presidency he used the relationship so much that Clinton's daughter Chelsea eventually stepped in and ended it.

The Clinton campaign in 2016 was broadsided by allegations on Wikileaks made by Chelsea, of Teneo using Clinton’s names without his knowledge to call up major potential clients. In one accusation, an employee of the Clinton Foundation was alleged to have called potential Teneo clients giving the clear impression Clinton was backing the bid.

The story made the front pages of the NY Times, Wall Street Journal, and Washington Post, leading to speculation it could play a role in the presidential election

But Teneo by then was getting much bigger than just the Clintons, In addition to Kelly, it was then run by former Clinton advisor Doug Band, who recently departed after a self-immolating article in Vanity Fair on how he saved the Clintons post-presidency.

In recent years, he has focused on supporting British charities and mixing with Lords and Ladies at British events such as the Royal Academy of Arts America which he chairs. Going British has further alienated him with many Irish Americans who feel he has lost the run of himself reviving memories of Sir Anthony O’Reilly, similarly a man of very modest background, who worked assiduously to be knighted by the Queen.

The duality of Kelly can be seen in the sense that alternately Teneo underwrites the Tipperary hurling team managed by boyhood friend Liam Sheedy about as far away from the halls of Windsor Castle as you could get.

Doubtless with the British, Kelly always demands the prime spot. At the Business and Finance magazine awards dinner in 2010 in Dublin, a massive row emerged backstage as to who would introduce the former president Clinton which almost came to blows in some accounts. Kelly eventually won out but made long-time enemies in the process, including leading billionaire businessman Denis O’Brien, who is very close to the Clintons.

It was indicative of a major and puzzling Kelly trait, demanding the limelight irrespective of who was present, grabbing an icy grip-hold of a microphone, and letting go when he is good and ready no matter who is waiting to speak after him – even presidents or prime ministers.

That was obvious in Ireland at the Irish-government-run Diaspora Economic Conference in 2011.  Kelly kept a furious Irish Prime Minister waiting as he introduced Clinton again, and made clear his company Teneo had brought him to Dublin. Clinton himself was said to be incensed by the alleged insult to the Irish leader.

The need to be the center of attention is very evident. Very few figures create as much love/hate controversy in the Irish American community.

His winner-take-all strategy can backfire, however, never more so spectacularly as when he decided he would take a run at becoming Chairman of the American Ireland Fund, the most prestigious Irish organization in America, with a membership list that reads like a who's who of Irish American business power.

However, there was deep internal opposition, a legitimate fear that the AIF would become another “A” list for Kelly to plunder, a target-rich environment for Teneo. The fear was the Fund would end up as a functional subsidiary of Teneo Inc. Over a fraught weekend the board opted instead for John FitzPatrick, CEO of FitzPatrick Hotels

It is safe to say given subsequent controversies involving Teneo and Kelly, the risk-averse Ireland Fund board members have breathed a long sigh of relief they did not pick Kelly.

He quickly won admirers – and enemies – wherever he went. His brother Alan, a former minister in the Irish government, has a similarly hard-nosed approach to life. Declan Kelly has his detractors too. One PR company leader from all those years ago says he would refuse to shake his hand even now if he met him, saying he never knew anyone so devious. Others, however, laud his 'take no prisoners' attitude and business ability.

His ambition is so evident that his latest fall from grace has been met with astonishment more than satisfaction.

Another key client has been Coca-Cola. He got to know Don Keough, then President of Coca-Cola and the most prominent of all Irish American business leaders, who became a strong advocate of Kelly within the company.

Keough had probably one of the top five Rolodexes in American business and counted Bill Gates and Warren Buffett, who had lived across the road from him in Omaha, among his close friends.

“I’ve wandered around in the world of consultants for a very long time and Kelly is the best.

Kelly owed a tremendous amount to Keough, who opened doors to corporate America that Kelly desperately needed, which made even stranger his failure to show up at the funeral when Keough passed away in 2015.

Now Kelly is back in the limelight, this time on a pressing personal issue. Safe to say most will wish him well to overcome whatever alcohol problem he bears, but it is also safe to say this headline-making behavior is not what people would have expected. But Kelly will sail on a boat against the current like the great Gatsby figure he vaguely resembles. Whether he overcomes these accusations and saves his career remains to be seen. For a top PR man, he needs the best PR advice available now. Even that might not be enough.