The Irishman caught napping at the Super Bowl in a viral video is well-known businessman Declan Kelly. 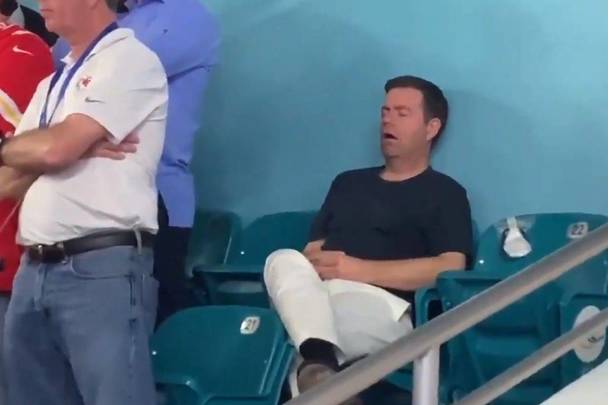 The Irishman caught napping at the Super Bowl in a viral video is well-known businessman Declan Kelly (52) CEO of Teneo Public Relations firm, a native of Tipperary.

There have been over 6 million views of the tweet showing a roused crowd and loud stadium and then Kelly napping in his corner seat.

Somehow, this man is sleeping through the #SuperBowl.

We’re still only in the first quarter. pic.twitter.com/erK0gfpqvQ

Kelly is a close associate of President Clinton and served as Economic Envoy to Northern Ireland having raised over $3 million for Hillary’s campaign for president.

Kelly moved to the US after selling his public relations business in Ireland and soon became known as a guy on a mission in America to reach the top in the PR field.

He befriended key political and business leaders and created Teeneo as an advisory group for some of the top business and political leaders in America.

He explained that Global Goal Live: The Possible Dream” is a year-long campaign that will culminate in a global media event. Kelly revealed that he was inspired to organize the campaign after meeting with Hugh Evans, CEO of Global Citizen, an international movement aimed at ending extreme poverty by 2030.

Read more: Ireland gets McDonald's Shamrock Shake 2020 ahead of America