Here, Niall O'Dowd recalls his chilling face-to-face interview with one of the world's most notorious killers. 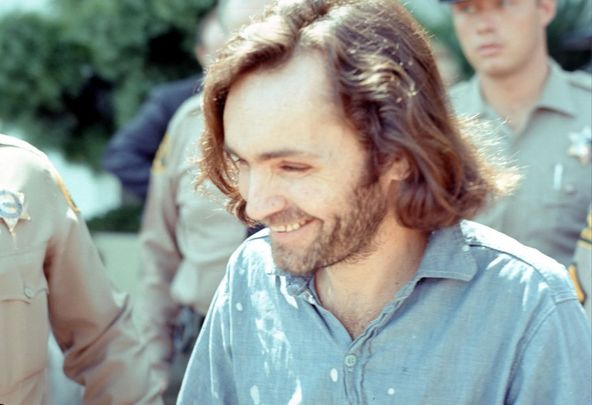 American criminal and cult leader Charles Manson (1934 - 2017) is escorted by Los Angeles County sheriffs to a police van to the Santa Monica Courthouse to appear in court for a hearing regarding the murder of music teacher Gary Hinman, Los Angeles, California, June 25, 1970. Photo by Michael Ochs Archives/Getty Images

Quentin Tarantino's "Once Upon a Time in Hollywood" was released three years ago this month. While fictional, the film accurately portrays the Manson Family and the lead up to the murders.

Niall O'Dowd was one of  a handful of journalists to interview Charles Manson, this is his account

I went to see Quentin Tarantino's masterpiece "Once Upon a Time in Hollywood in preview when it came out three years ago. It blew me away, one of the best I've ever seen.

It is set around the Manson family murders that shocked the world in August 1969.

It brought back memories of my one-on-one encounter with the evilest man alive, as he was often referred to. Back in 1982, when I owned a small Irish newspaper in San Francisco, I was doing a feature on Irish Catholic prison chaplains in California which took me to the three most notorious prisons – San Quentin, Folsom and Vacaville – to profile three brave padres who often put their lives in danger to help inmates.

Vacaville, in Central California, at that time was the home of the notorious Charles Manson. Father Pat Leslie, the Irish priest from County Louth who was his pastor, had struck up a relationship with him. He agreed to the interview and said he'd introduce me to Manson and I readily agreed. I had no idea what lay ahead.

On a white-hot day in midsummer a friend, Colm McCann, and I made the trek down from San Francisco.

The gates of Vacaville were imposing, once inside one you were in an airlock until the guard decided to open the second one. A tense atmosphere of paranoia reigned. Dante’s lines “Abandon hope all who enter here” flashed into my head.

I had read all about Manson in Victor Bugliosi’s book “Helter Skelter,” which chronicled the insane killing spree by members of Manson’s gang in the Los Angeles area in the early 1970s. Although Manson himself did not carry out the killings, his robot-like killers seemed to respond to his every whim.

There were far worse mass murderers than Manson, but, as far as the general American populace was concerned, few seemed to plumb the depths of horror and revulsion that Manson did.

In many ways, he was the perfect antidote to the flower power movement and the summer of love in San Francisco. Middle America had looked askance at that movement with its emphasis on free love and sex and Manson provided the necessary vehicle to attack such newfangled concepts.

Now I was to meet him with Father Leslie. Pat Leslie was a quiet man with the slim build of a marathoner, which indeed he was. He had a low key manner and hardly seemed to know much about Manson’s notoriety, or more likely, not to be affected by it.

Manson’s job back then in Vacaville was helping out in the church, quite a contrast to his life on the outside. I assumed Father Leslie would stay with me during the interview, but he dropped me off in a little courtyard behind the church where Manson and another man, who I later learned had murdered his parents, sat.

Manson strummed idly on a guitar during our conversation, breaking into it only to tell me that I would be famous for doing this interview. Not quite, but it did cause a minor sensation, especially the photographs.

Manson was much smaller than I had expected, a tiny man really and he had a swastika emblazoned on his forehead. A few sentences into our conversation I found him quite mad and rambling and a complete psychopath. He was clearly a man who could stab you with a knife or hold a pleasant conversation with you and not know the difference. His language was incredibly violent.

Years later I got to know a notorious Loyalist paramilitary in Northern Ireland who was part of the Irish peace process. This man reminded me of Manson in the violence of his language and the constant hate-filled assertions. Whatever dungeons of his mind Manson dragged up his fevered cants from it was clear that here was a deeply disturbed person.

What was extraordinary to me was how he had held power over so many people. What seemed mostly gobbledygook to me had deeply impacted many of his followers to the point where they were prepared to kill for him.

During our conversation, Manson kept strumming the guitar and sang his latest composition to me – something about the damage being done to the birds and the environment by big oil companies. Coming from a man who hadn’t hesitated to direct the savage taking of human life it was quite an irony.

I remained deadly afraid throughout the meeting that he would swing the guitar at me, as I thought him eminently capable of it, and it would certainly garner him the headlines he clearly loved.

In fact, I was working out my moves if he tried to do it. This mostly included the notion of running away as fast as I could but seeing as we were locked into a small courtyard that may have been quite difficult. The sight of Manson chasing me around the courtyard might have been funny in retrospect, but obviously not to me.

Meanwhile, the other guy who had killed his parents seemed unhappy that I wasn’t interviewing him. He cleared his throat a few times and tried to get into the middle of our conversation. Manson fixed him with what I presumed was his allegedly hypnotic stare, which looked to me more like a cross-eyed grimace.

“Stay out of this man,” he said, “me and the dude have it going.” The mother and father murderer promptly shut up.

I was never as relieved when an interview ended as I was when Father Leslie returned. It was only in the car driving back to San Francisco that I finally relaxed. I had met the craziest man alive in many people’s estimation and lived to tell the tale.

“Deep in my dungeon, I welcome you here

Deep in my dungeon, I worship your fear

Deep in My dungeon, I dwell

US Supreme Court is over-reliant on outdated Constitution