Esquire magazine hosted a virtual watch party for the 1995 James Bond film GoldenEye which starred Pierce Brosnan and he spilled the goss! 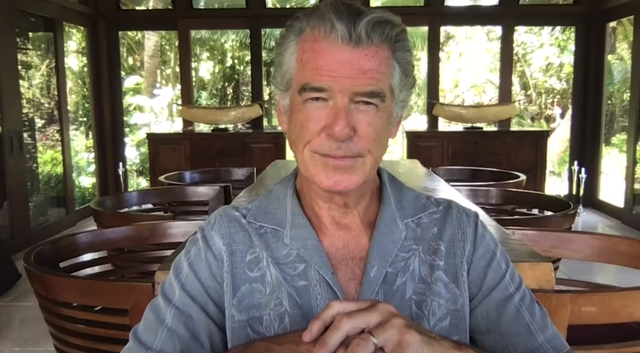 Pierce Brosnan, lived from his home in Hawaii. Esquire / YouTube

Esquire magazine hosted a virtual watch party for the 1995 James Bond film GoldenEye which starred Pierce Brosnan and he spilled the goss!

The Irish star joined the party from his home in Hawaii, and he had some funny stories to share about his first outing as James Bond which proved to be hugely successful – GoldenEye banked more than $350 million, which in today’s money surely would be close to a billion.

Pierce told a funny story about meeting Oscar-winning director and screenwriter Quentin Tarantino, who wanted to put his own stamp on the James Bond franchise with Pierce reprising his role.

"It was after Kill Bill Vol. 2, and he wanted to meet me.  So I went up to Hollywood one day from the beach, and I met him at the Four Seasons,” Brosnan recalled.

"I got there at 7 p.m.; I like to be punctual. 7:15 came around, no Quentin, he was upstairs doing press. Someone sent over a martini, so I had a martini, and I waited till 7:30, and I thought, where the heck is he? Word came down, apologies, so I thought, okay, I'll have another martini."

The booze went to his head, and when Tarantino eventually arrived they had more martinis and were both “fairly smokered,” Pierce remembered.

"He was pounding the table, saying, ‘You're the best James Bond, I wanna do James Bond,’ and it was very close quarters in the restaurant and I thought, please calm down, but we don't tell Quentin Tarantino to calm down.

"He wanted to do James Bond, and I went back to the shop and told them but it wasn't mean to be. No Quentin Tarantino for James Bond.”

One viewer wanted to know if Pierce kept any memorabilia from his time as 007 – he starred in four films.   “They’re very protective of their props…but I do have the suits. I have a wardrobe of hand made bespoke tailored suits from Brioni…they don’t fit me anymore. A little snug,” he shared.