Brexit, it appears, is backfiring. Shut gas stations and empty shelves in many groceries stores was not supposed to be Britain's "new" reality. 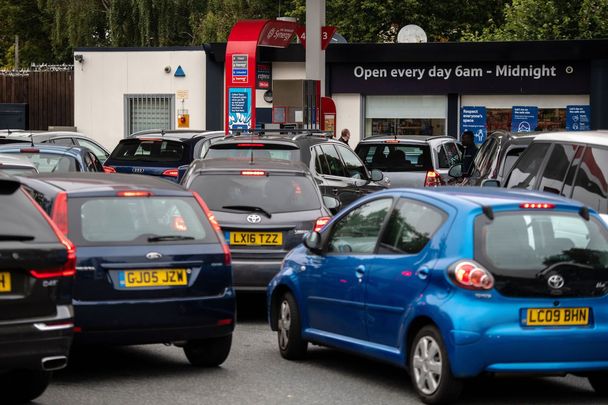 Cars line up outside a gas station in England. Getty

“No doubt this country is going to prosper mightily,” British Prime Minister Boris Johnson declared when Brexit became a reality last year. Not so it seems.

The Times of London lead headline on Monday, September 27, indicated the opposite.  It was: “Army Will Be Sent In to Tackle Fuel Crisis.”

It so happens that 90 percent of petrol stations in Britain had run dry.

The situation is desperate.  The Times reports, “Soldiers are likely to be put on notice to drive petrol tankers to forecourts within days as motorists continue to panic buy, the Times has been told.”

Why you may ask? Well, there is a fuel shortage with Russia and Norway cutting back deliveries to Britain.  There is also the pandemic impact, when truck deliveries of goods to homes soared and a huge number of drivers signed for Amazon, etc.

But far more serious is there is no one to drive the huge petrol tankers to the filling stations.  In fact, it has become so bad that there was a report in the Times about a truckload of mattresses abandoned at a gas station.

A recruiter for another firm was hanging around the filling station, grabbed the driver, offered to double his wages and added a huge signing bonus. Not surprising the driver quit the mattress company there and then.

It appears that about 80 percent of the truck drivers in Britain were non-nationals and they have all been sent home, or left because of the way the British were treating them after Brexit.

The Times reports, “More than a third of HGV (truck drivers) are over 55 and in the past 18 months about 55,000 domestic drivers have left the industry. At the same time, the industry has failed to fill the gaps with domestic workers.”

Apparently, truck drivers were treated very shabbily to begin with, working long and exhausting hours. Brexit border controls have resulted in massive jams at the approach roads to and from the Chunnel between Britain and France and other ports of entry.  There is also a barrage of custom documents that have to be filled out going both ways.

The truck drivers were making about $45k a year and driving a horrific amount of hours. The Brexit laws no longer allowed them to work in Britain so they scarpered off home, most to Eastern Europe where they could at least work legally.

Ironically, many landed in Ireland where there is apparently lots of international work driving to and from French ports unhindered by borders like under the old EU rules.

Meanwhile, the British appear to be panicking about using the army especially.

The Times reports, “The government is expected to order the military to prepare hundreds of personnel to man tankers. The Petrol Retailers Association, which represents the majority of petrol stations in Britain, estimated that between 50 and 90 percent of them had run dry.”

Apart from soldiers, hiring bonuses for truck drivers has become a new reality.  Pay levels are now around $65k with a job guaranteed after training.

But Brits, it appears, do not want to drive petroleum tankers or any trucks.

Johnson does not seem to be so confident these days. Brexit, it appears, is backfiring.  Shut gas stations and empty shelves in many stores was not supposed to be the new reality.

Johnson announced that 5,000 foreign truck drivers would be allowed into the country in an attempt to ease the delays in supplying filling stations.

As the British line up for miles for gas, as they hope they have home heating this winter, as they pray that normal supply lines are restored for Christmas it will be interesting to see how Brexit is viewed in a year.  As a miserable choice, I believe.