Bono slams "moral arc" under current president as Bush plans to honor U2 front man for work in Africa. 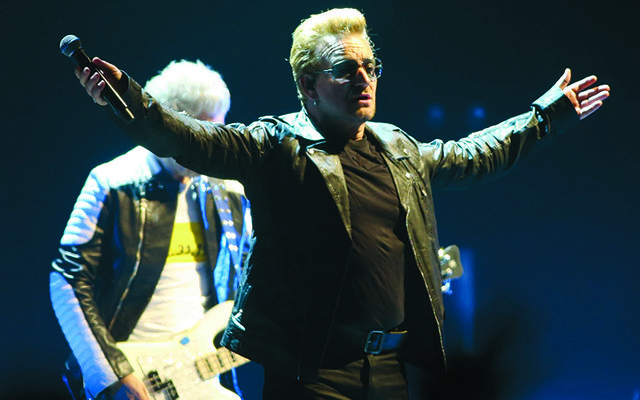 George Bush recently announced he was going to honor Bono with the first George W. Bush Medal of Distinguished Leadership for his humanitarian work in Africa.

“Bono’s passion for ending poverty and disease is the real deal. He uses his celebrity not for personal gain, but to improve and save lives,” Bush said in a written statement.

The mutual admiration society was evident. Bono said: “More than 11 million people are alive today thanks to this man’s (George W. Bush) creation of PEPFAR, the U.S. AIDS program that has been saving lives and preventing new HIV infections for over 10 years, with strong support from political leaders right, left, and center.”

At the same time Bono went ballistic in “Rolling Stone” slamming President Donald Trump saying the “moral arc” of the universe had been disturbed by him since he was elected.

Bono said: “For the first time in many years, maybe in our lifetime, the moral arc of the universe, as Dr. King used to call it, was not bending in the direction of fairness, equality and justice for all.

The baseness of political debate, the jingoism, the atavistic fervor of Trump's verbiage reminded us that we were dreaming if we thought evolution applied to consciousness. Democracy is a blip in history and it requires a lot of focus and concentration to keep it intact.”

Sorry, Bono. If anyone bent the moral arc it was Bush and his unwarranted war on Iraq that has left up to 500,000 dead and millions injured and a country and region devastated.

Trump never sent the country to war as Bush did in Iraq under false circumstances. He and sidekick Dick Cheney ginned up a war that cost up to 500,000 lives, created ISIS, cost thousands of American lives and trillions of dollars and made the world an immeasurably more dangerous place.

Donald Trump has done nothing of the sort. His only foreign intervention so far was to lob a missile at the despot Assad in Syria to get him to stop using poison gas bombs on children and civilians.

Yet it is Trump who disturbed the moral arc according to Bono?

Accepting an award from Bush is not Bono's finest hour irrespective of the former president’s work on AIDS. Coupling that with a slashing attack on Trump who has not committed any acts of war whatever is doubly hypocritical.

We may not like what Trump says or his doctrine, but it is a long way from starting a war against a dictator who did not have chemical weapons and had no connection to 9/11 hijackers. (That was Saudi Arabia, remember.)

Sure, Bush might be a good guy to drink a pint with, but his Iraq war record marks him down as an American president with innocent blood on his hands and thousands of needlessly dead Americans as well.

So, get real Bono. We may not like Trump’s rhetoric, but he is not embroiling us in fake wars with dreadful consequences like Bush did.

You should refuse the reward. And place the blame for the arc of moral justice going astray where it belongs – with your best buddy in Texas.

You know you are contributing to the Zeitgeist notion that maybe Bush wasn’t so bad after all. Just visit a Veteran Administration hospital and ask a few Iraqi war vets.