Why U2 have finally found what they have been looking for

In the battle for American minds and hearts, U2 still have huge leverage. That is surely what they must continue to look for. 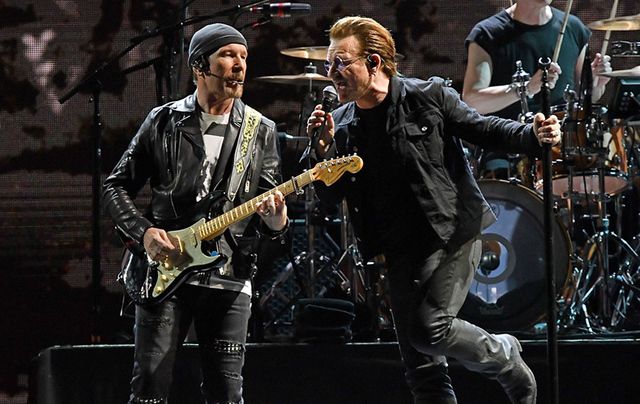 The Edge and Bono onstage at MetLife Stadium last week.

Music is a soundtrack to all our lives, recalling nostalgic moments half remembered until you hear that song that triggers something, recalled forever in a lyric or a note, transient as a summer breeze but no less enjoyable because it is just a moment.

For much of my life in America U2 have provided a constant soundtrack, not just the music but the narrative.  Four guys from Ireland become the greatest rock band of the modern era and do good as well, rather than smashing guitars and wrecking hotel rooms.

The sense of pride that four young Irishman have conquered the world has never left, but even so at MetLife Stadium in New Jersey last Thursday night where the band performed, it was so great to hear Bono point out how Irishness is so much of their trademark.

Ireland remains a speck of an island off Western Europe, but its contribution to world culture has been utterly disproportionate. You could argue that much of its greatest contribution has come from sons and daughters of exiles like Eugene O'Neill or Thomas Keneally, to the Pogues or Ed Sheeran, but U2 would be the rock in the road on that argument.

As the generations passed the image of Ireland presents to the world has changed from Bing Crosby’s sentimental prattle to U2’s far more hard edged but distinct voice of Ireland.  I know which era I would rather be identified with.

In a strange way the four members of U2 have become incredible interpreters of America too. As newcomers they saw what many natives took for granted. America is a continent, a vast breathing diaspora of people living in an amazing land.

The wide-open spaces, deserts and mountains inspired much of U2’s greatness, the murder of Martin Luther King and the struggle against slavery’s remnants the dark undercurrent. That was evident then and is especially so on "The Joshua Tree," the U2 album 30 years old this year that the band is rightfully celebrating on its current tour.

In that album the band’s vision of the two Americas, the gentility and greatness challenged by the mean and savage, was never more true than today when the forces of darkness – insular, paranoid, nasty – seem to challenge in a very serious way the bright land that lies between sea to shining sea.

A measure of how far perceptions have moved is that Ronald Reagan’s America, a foul place by U2’s own comments around the making of "The Joshua Tree," has become 30 years later almost the shining city on the hill that Reagan foresaw.

"Thank you Ronald Reagan" as Bono states on this tour. Replaying his words on making immigrants welcome are words Bono could never have uttered 30 years ago, or he would have been ridiculed as a patsy.

The very ground has shifted and U2 are trying to understand it.  It reflects the constant quest for meaning that drives the band, and Bono in particular, forever exemplified in the track “I Still Haven't Found What I’m Looking For.”

Yet the same song is a contradiction as earlier in the lyrics Bono sings that he believes in “kingdom come,” a religious tilt very visible in their earlier work, not so much now. The band actually has come full circle and found the answer to what they are looking for – relevance above all else, and an ability to contribute and to shape the great debate.

U2 made a point of laying off politicians after Reagan and rightfully so as Bono forged critical links with Republican firebrands like Jesse Helms and leaders like George W. Bush in the battle against HIV AIDS.

However, President Trump is a bridge too far as a mocking clip shown at their live performances makes clear.  Even Bono, the great equalizer, cannot stomach this White House incumbent. He exists beyond the pale for them.

That is a profound message to send to U2’s tens of million of followers but a truthful and correct one. In the battle for American minds and hearts, U2 still have huge leverage.  That is surely what they must continue to look for.