U2 were in the capital for a concert, and Bono took the opportunity to schedule meetings with legislators to push for continued U.S. funding for global anti-poverty initiatives. 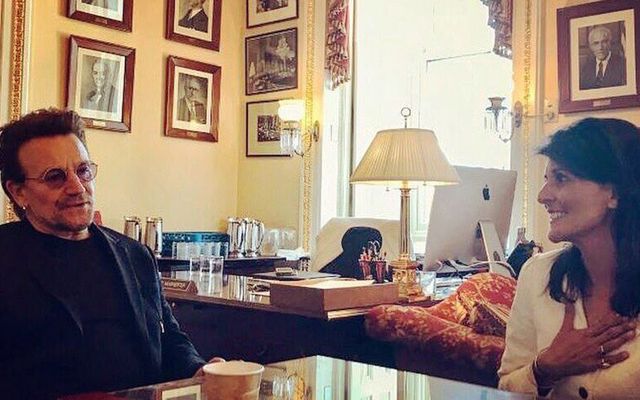 Bono hasn’t been shy about unloading on President Donald Trump, but his distaste for the current White House occupant doesn’t extend to other GOP leaders and even a member of Trump’s cabinet who he met last week in D.C.

U2 were in the capital for a concert, and Bono took the opportunity to schedule meetings with legislators to push for continued U.S. funding for global anti-poverty initiatives. Among those he met on Capitol Hill were House Speaker Paul Ryan, House Majority Leader Kevin McCarthy and Senator Bob Corker – Republicans one and all.

Bono also paid a visit to Congressman Steve Scalise’s office to sign a get well card and meet with his staffers – Scalise, of course, was shot by some nut earlier this month while playing baseball with other colleagues and is lucky to be alive.

Trump’s pick for U.S. ambassador to the United Nations Nikki Haley was also on Bono’s calling list. She was clearly in awe of the U2 frontman, tweeting an adoring photo of herself and Bono with the words “starstruck” and “DidIEvenMakeSense.” Her Twitter-obsessed boss probably wasn’t too impressed.

A spokesperson for Bono’s ONE anti-poverty campaign said he met with Republicans and Democrats and was “highlighting the lives saved by America’s investments in foreign assistance and underscoring testimony given by 16 retired generals and admirals last week about the critical importance of development to America’s national security.”