Former US President said “Bono’s passion for ending poverty and disease is the real deal... I am thankful for his big heart and for his leadership." 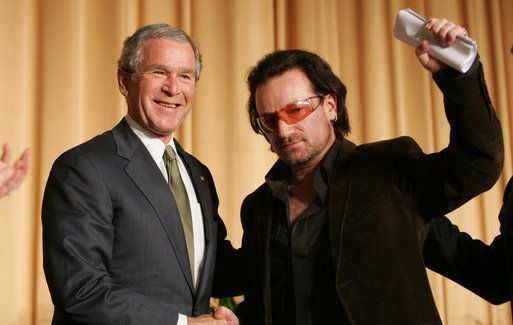 The bromance between Bono and George W. Bush continues.  The former president announced last Friday that his U2 bestie will receive the inaugural George W. Bush Medal of Distinguished Leadership during a forum next April at the George W. Bush Presidential Center in Dallas.

“Bono’s passion for ending poverty and disease is the real deal. He uses his celebrity not for personal gain, but to improve and save lives,” Bush said in a statement. “I am thankful for his big heart and for his leadership, and I am proud that he will be the first recipient of the Medal for Distinguished Leadership.”

Bono and Bush were allies – at least when it came to poverty and disease control in Africa – while Bush was in the White House.  And they’ve maintained a solid friendship ever since, with Bono visiting Bush at his Crawford, Texas ranch in May.

“Bono is the real deal. He has a huge heart and a selfless soul, not to mention a decent voice,” Bush wrote on his Instagram – yes, he’s got an Instagram with a million followers – after the visit.

You likely saw that U2 had to cancel its concert in St. Louis on Saturday night due to the civil unrest in the city over the acquittal of a police officer in the shooting death of a black man.  The show, unfortunately for U2’s fans, won’t be rescheduled.

“Deeply saddened at what has happened in St. Louis and having to cancel our show tonight….I found myself reading Dr. King’s speech from the National Cathedral and asking myself is this 1968 or 2017?” Bono asked on Instagram.