John Hume, hero of the peace process in Northern Ireland, died at the age of 83 last Monday. 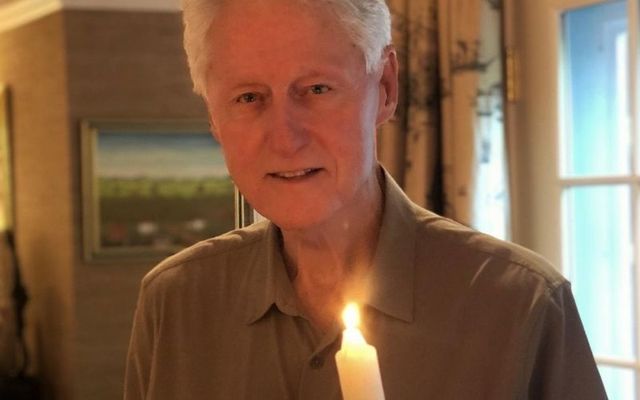 President Clinton lit a candle for peace and said a prayer in honor of his friend, John Hume. Hume Foundation

Friends family and mourners all lit candles for Hume, whose funeral was a much smaller affair because of COVID-19. Clinton insisted on making his own tribute and the Hume Foundation released the picture.

Clinton stated: “Hillary and I are deeply saddened by the passing of our friend John Hume, who fought his long war for peace in Northern Ireland. His chosen weapons: an unshakeable commitment to nonviolence, persistence, kindness and love. With his enduring sense of honor, he kept marching on against all odds towards a brighter future for all the children of Northern Ireland.

"Through his faith in principled compromise, and his ability to see his adversaries as human beings, John helped forge the peace that has held to this day.  I’ll never forget our night in Derry in 1995, with the town square and blocks around full of hopeful faces, walking with him across the Peace Bridge nearly 20 years later, and all of the moments we shared in between.

"His legacy will live on in every generation of Northern Ireland’s young people who make John’s choice, to live free of the hatred and horror of sectarian violence.  And it will endure in the hearts of those of us who loved him and will be shaped by his example to the end of our days.

"Our love and prayers are with Pat, their children and grandchildren.  May he rest in peace, never losing the twinkle in his eye or the sly smile that lighted our eyes."

Hume historian and filmmaker Maurice Fitzpatrick stated that "Hume’s influence was most pivotal during the presidency of Bill Clinton, whose interventions for the assembly of peace in Northern Ireland were crucial. Clinton consistently identified in Hume’s constitutional and reconciliatory principles a viable future for Northern Ireland."