Biden calls out Turkish massacres of Armenians as genocide - was the Irish famine too?

In a sensational move, President Joe Biden has formally declared the Turkish massacre of 1.5 million Armenians in 1915 and 1916 as genocide. Many will draw parallels with the Irish famine and ask if that was genocide too. 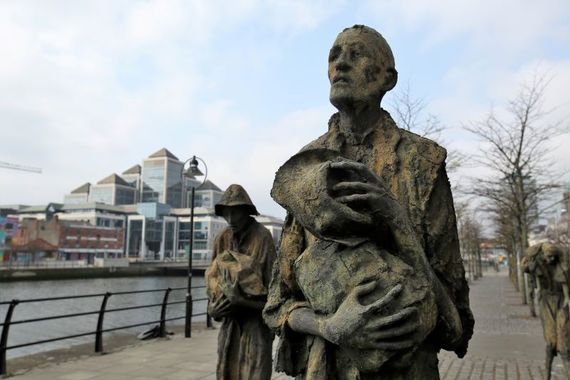 The Turkish treatment of Armenians during the First World War was genocide President Joe Biden has stated, in a deeply significant act.

The murder, rape, starvation, torture, and deaths of 1.5 million Armenians by the Turks was always a clear example of genocide and it is heartening to note it was an Irish-American president that finally reached for the truth.

Over one-and-a-half million Armenian families, many just children or elderly and sick were sent on death marches into the Syrian desert where they were left to die in 1915 and 1916.

The definition of the Armenian massacres as genocide should have come long before this but realpolitik and the obsession of the Turkish government with it not being called genocide stayed the hands of every American president up to Biden.

A movie ‘The Promise’ directed by Irish Oscar-winning director Terry George based around the massacre was the subject of a massive effort by Turkish agents to stop widespread distribution and limit the damage the movie created.

Of course, now that the Turkish killings are officially genocide where does that leave the Irish famine where an estimated 15,000 people a day were dying of starvation while the British were evicting them and exporting their food?

Author Thomas Gallagher in “Paddy’s Lament, “ states that during the first winter of famine, 1846-47, as 400,000 Irish peasants starved,” landlords exported 17 million pounds sterling worth of grain, cattle, pigs, flour, eggs, and poultry—food that could have prevented those deaths.

In fairness, Tony Blair’s heartfelt apology in 2011 and acceptance of British perfidy went a long way, but author Tim Pat Coogan in his 2012  book “The Famine Plot”  is perfectly prepared to call the Famine genocide. The most significant section of Coogan’s book on the Irish Famine is not his own writing, but his printing of the United Nations definition of genocide.

“In the present Convention, genocide means any of the following acts committed with intent to destroy, in whole or in part, a national, ethnical, racial or religious group, as such:

Ireland’s most prominent historian, who has previously created definitive portraits of both Michael Collins and Eamon De Valera, pointed the finger squarely at the British during the Famine and stated it was genocide.

Charles Trevelyan was the worst of them all.

Trevelyan, the key figure in the British government, had foreshadowed the deadly policy in a letter to the “Morning Post” after a trip to Ireland, where he heartily agreed with the sentiment that there were at least a million or two people too many in the benighted land and that the eight million could not possibly survive there.