"Born in the 1830s the Athlone people in this photograph would have survived the awful Irish famine." 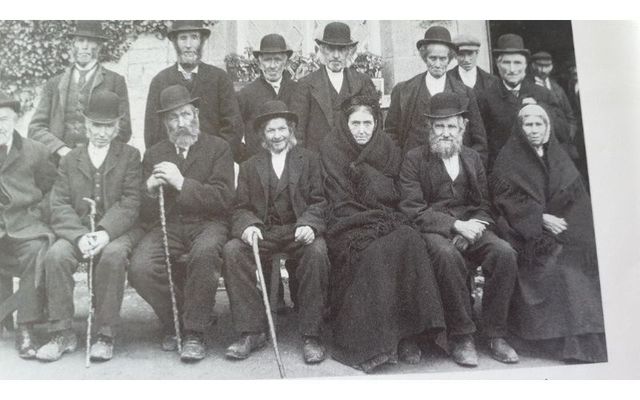 This photo was taken in 1909 on a very special occasion. They were the first Athlone people to receive the new old-age pension.

In 1909 a non-contributory old-age pension was introduced in Ireland. To be eligible, applicants had to be 70 years old, have an income of less than £31.10. 00 per annum ($43), and to 'be of good character'.  Each week they received the equivalent of less than half a dollar!

Born in the 1830s the Athlone people in this photograph would have survived the awful Irish famine in 1846. They were hardy folk indeed, for life expectancy in 1909 Ireland was only 41 years. Life expectancy is exactly twice that in Ireland now. It is 82 years.

Note the attire on the people in the photograph. Compare what ‘old’ women wore then with the style and color of the lovely clothes we wear nowadays.

In this photograph (taken just before the Covid crisis) most of us are over 60. My two elderly aunts in the photo are in their mid-90s. Both aunts remember their grandmother very well. This grandmother was born around the same time as the old pensioners, in the first photograph - just before the famine. Whenever I think of this fact it bring to my mind that the awful Irish famine was not so long ago.

Back to 1909. On receiving their pension, the old folk (dressed all in black) might have headed into the town of Athlone to spend their vast fortune! They might have walked through Victoria Place and crossed the bridge to the shops in King Street and Queen Street.

Ireland was under British rule then. Custume Place, Pearse Street, and Connolly Street are the names of these places now.

Most of the streets and terraces in the center of Athlone are called after Irish patriots. I remember we had a teacher in sixth class who had a great interest in local history. She got us all to learn about the person our street was called after. We then had to stand up in class to talk about that person.

A procession into Athlone in the 1940s.

Being from O’Connell Street I had to speak about Daniel O’Connell. I can still recall my lines. “Daniel O’Connell was a great political leader of Ireland's Roman Catholic majority in the first half of the 19th century,” and more.

The girl beside me, from Parnell Square, told us all about Charles Steward Parnell. The girl sitting behind me, from Pearse Street, spoke about Patrick Pearse, leader of The Easter Rising in 1916.

One girl insisted that her grandparents lived in a terrace called after a wolf. “They live in Wolfe Tone Terrace,” she told the nun. “Was his first name Wolf?” we all wanted to know. I remember the nun explaining to us that this patriot’s Christian name was Theobald. Then she explained what a double-barrelled surname was. Theobald’s mother’s surname was Wolfe and his father’s was Tone. We knew our Irish history very well back then, in National school.

The River Shannon flowing through Athlone.

As Irish towns expanded out into the suburbs new estates took on names not related to patriots at all. Developers, keen to sell an image of affluence and opulence, began giving their estate ridiculous names – none more so than ‘Tuscany Downs’ in a small Mayo village.

I’m delighted to know that County Councils, in Ireland, now must have ‘naming committees.’ I read online that ‘these committees were established in 2008 to ensure as far as possible that place names reflect the rich Irish cultural heritage of that county.’ This is a very positive move. Two new estates here will be named after an Athlone female author, Hanna Greally, and a brave Athlone army officer, Pat Quinlan, both well worth remembering.

And just last week Mary Lavin became the first female Irish writer to have a public space named after her, in Dublin.