Biden would love a Trump rematch in 2024 election

"If the GOP has indeed utterly lost its marbles and chooses Trump again, my guess is Biden strolls to a second term." 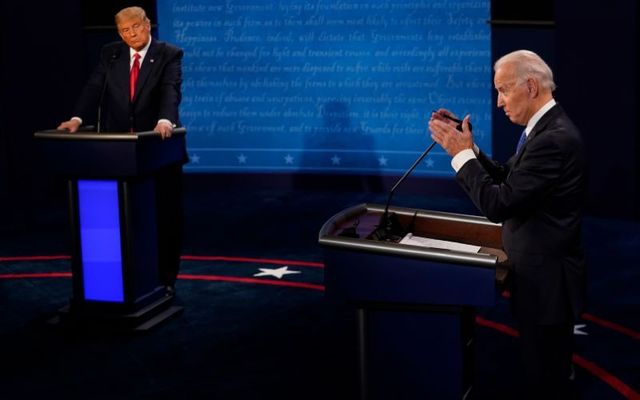 Joe Biden and Donald Trump face off in the final debate before the 2020 presidential election. Getty Images

In electing Obama, one-time journalist Axelrod helped achieve the impossible. As campaign strategist, he played a vital role in securing the presidency against all odds for an African American.

Thus, you have to take notice when Axelrod makes clear that President Biden is too old to run for the job a second time in 2024, as he did in a recent New York Times interview.

"The presidency is a monstrously taxing job and the stark reality is the president would be closer to 90 than 80 at the end of a second term, and that would be a major issue,” Axelrod said.

Translation: “Joe, I hate to tell you this, but you are too old.”

The Times article brought out the Democratic Party bedwetters, those members convinced the sky is falling in 2024 and Biden’s age will foretell a massive defeat.

Not so fast, however. Indeed, Biden may continue to be the ace in the pack when it comes to defeating Trumpism.

Given all the crises – pandemic, inflation, gas prices, Ukraine war, etc. – one would expect Biden to be running about 10 points south of Trump.

But not so, it seems, for our Irish American president. So far, Biden holds a small edge in almost every 2024 poll if Trump is the opponent.

However, therein lies the rub. Biden’s best shot by far is for Trump to be his opponent. An 82-year-old facing off against a 78-year-old dulls the edge of the criticism of Biden’s age. Also, Biden won their debates easily and clearly is able to handle Trump’s bombast and threats.

In addition, the fallout from January 6 and the riot at the Capitol will surely be front and center in Biden’s arsenal of political weaponry. The House Select Committee on the insurrection has served a vital role in recalling for every American how close we came to anarchy because a desperate president listened to an inebriated advisor rather than his professional staff.

If Biden’s opponent is not Trump, but a Trump wannabe like Florida Governor Ron DeSantis, who would be just 45 in 2024, then it becomes a very different issue of young versus old, renewal versus status quo.

Having an 82-year-old man running for president is no one's idea of a perfect candidate, but as so often it comes down to a zero-sum game. If the GOP has indeed utterly lost its marbles and chooses Trump again, my guess is Biden strolls to a second term, especially if his polling numbers at the time in 2024 are better than today's.

However, if the GOP opponent is younger, fitter, and more dynamic, then the Dems may have to look elsewhere fast.

If Biden catches a break and tamps down inflation, avoids a recession, sees an end to Russia's war in Ukraine, and if unemployment holds steady, his age may not matter as much.

Meanwhile, he remains the one man apart from Trump himself who hopes the Big Lie muck spreader will be his opponent again.