Biden has finally come up with a strategy that matches anything Trump has tried, and which is markedly more aggressive than his previous stance. 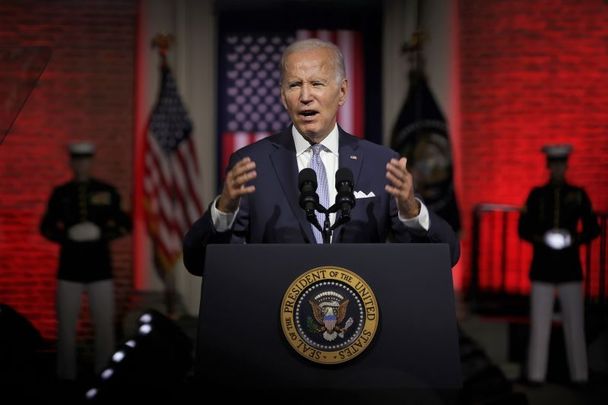 September 1, 2022: US President Joe Biden delivers a primetime speech at Independence National Historical Park in Philadelphia, Pennsylvania. President Biden spoke on “the continued battle for the Soul of the Nation.” Getty Images

Labor Day marks the traditional beginning of the midterm political campaigns for control of the House and the Senate, but it is safe to say that this year’s battles began the day after Donald Trump was evicted from the White House.

The fact is, if Trump had followed historical precedent and conceded the 2020 election, he would today be in a very powerful position and the unquestioned leader of the Republican Party. But by challenging the legitimate election won by Joe Biden, Trump tried to circumvent the rules and find a new way to become president which can be summarized as, “If I get more votes I win, and if I get fewer votes I win too.”

Finally, over the past week, President Biden has come out swinging, making no bones about what we witnessed on January 6, 2021, and what two years of control of the House and Senate by the GOP would mean for the country.

Biden has finally come up with a strategy that matches anything Trump has tried, and which is markedly more aggressive than his previous stance.

For the best part of two years, Biden tried to go along to get along, using the type of politics he employed during his 35 years as a US Senator when he was able to forge alliances with his opponents on the Republican side.

But at a recent high-level gathering in the White House, which included aides to former presidents Bill Clinton and Barack Obama, the decision was made to sharpen the message and turn Trump’s rhetoric back on himself.

Trump’s attacks on the FBI and the US Department of Justice have taken on the ring of hysteria more and more. The question must be asked – is he holding on to a fake version of the FBI raid on Mar-a-Lago because he desperately needs to counter Biden’s successful message that the GOP is out of control?

But no matter how much he huffs and puffs about all the wrong done to him, Trump cannot answer two questions that need an urgent response – why did he take top secret documents home to Florida in the first place, and what was he planning to do with them?

Trump to date has refused to answer those questions, and instead has classically turned the argument back to the Justice Department and the FBI. But this time, it doesn’t seem to be working.

Even conservatives on the Republican side, men like Karl Rove and retired jurist Michael Luttig, have made clear that what Trump did was wrong and may well have crossed into criminal behavior.

Biden and Trump will remain center stage after the midterms. Both men look like they have cleared the arena of any potential opponents within their own parties. We may be looking at a rematch in 2024, one that few Americans actually want.

Biden’s sharp message that anarchy will be loose on the streets, and that Trump will likely incite violence as he did on January 6, represents a new, aggressive stance by the president who has clearly come to the conclusion that you cannot bring a knife to a gunfight when the gunslinger is Donald Trump.

Trump, for his part, is never happier than when he is making outrageous accusations. The latest one is that the FBI ransacked his son Barron’s bedroom and left it in shambles. You know he’s lying, but that does not stop the message getting out to his faithful fans that he’s a martyr in all of this, blameless and with clean hands, and the subject of a vicious campaign by the FBI to jail him.

There are millions who believe Trump, but there are also signals that he is running out of road and excuses for his behavior. If he’s allowed to take top secret documents from the White House and it is not considered a crime, the people’s faith in the rule of law will once again be shaken.

This year’s midterms were looking bad for the Democrats until the Supreme Court decided to overturn Roe v. Wade. The reaction to that decision among women has been so ferocious that registrations for new voters are now 14 times higher among women than for men.

What does that tell us? In November, beware the power of women who will vote to answer Trump and his acolytes through the ballot box.