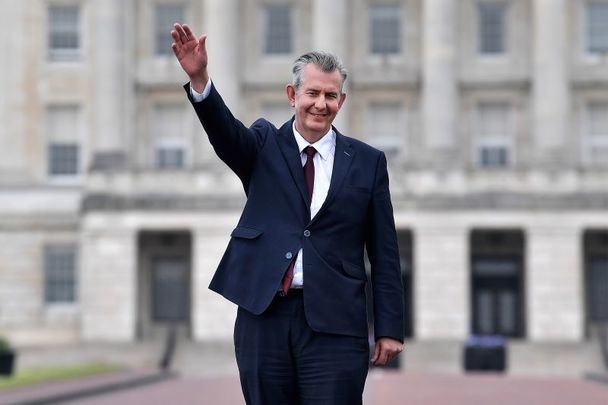 MLA Edwin Poots has been elected as the next leader of the Democratic Unionist Party (DUP). Getty

A bad month for Ulster unionism just got a lot worse with the narrow victory of arch bigot  Edwin Poots over Sir Jeffrey Donaldson by a margin of two votes in the Democratic Unionist leadership election.

The election of such a leader exemplifies the worst of unionism in Ireland with its rabid politics intertwined with religious zeal helping create a dreadful combination.

He is the most right-wing and bigoted leader in Europe and any attempt to whitewash that reality should be immediately called out. You can just imagine the response if Sinn Fein elected a homophobic bigot as leader.

Towards the end of his life, even Ian Paisley found the grace to be less strident and more cooperative with the result that he and Martin McGuinness of Sinn Fein served peaceably together.

One can hardly see Poots play that Paisley role. If he did, he would be devoured by the bible thumpers who made up his narrow majority.

His victory came at the worst of times for unionism. Sir Jeffrey Donaldson would have presented a far more moderate face but in fairness, he had very few liberal credentials either. He is still best known for walking out on party leader David Trimble during the Good Friday peace talks.

The split in the party which leaves it hopelessly divided, came as the Scottish were celebrating a  resounding vote for Scottish nationalism thereby endangering the entire United Kingdom project.

Also, his reputation as an arch bigot may result in many of the more moderate party members switching to the non-sectarian Alliance Party which has fast been gaining ground, especially among young people for several years.

That also brings into play the appalling vista for unionism of Sinn Fein becoming the largest party and holding the First Minister title.

In London, Boris Johnson was forced to apologize to the people of Ballymurphy over the shooting death by British Army soldiers of 10 innocent civilians in 1971 at the onset of The Troubles, a decision that no doubt displeased unionists

Meanwhile, in Dublin the forced retirement of journalist Eoghan Harris, unionism’s most powerful voice in the Irish Republic after he admitted he used at least ten fake blogs, took away the best friend unionism had in the south.

Harris held sway over several Irish leaders on Northern Ireland policy allegedly including the present one Michael Martin. Indeed, the tight as a tic election for party leader and role of First Minister could not have come at a worse time

The razor-thin margin shows that nothing is decided between the moderates (using the term advisedly ) and the hardliners within the party.

There is definite reason to believe that the DUP may have just voted themselves into future oblivion by this vote. The outcome is paralysis with the most right-wing racist leader in Europe today leading the party.

Edwin Poots is a delusional bigot who stands out like a sore thumb with his hatred of gays, ill-disguised contempt for  Catholics (they got the coronavirus in much higher numbers he claims), and with his embrace of bible thumping falsehoods such as the earth is only 6,000  years old.

Poots believes humans and dinosaurs roamed the earth together while scientific evidence clearly proves that dinosaurs were extinct about 60 million years before man walked the earth.

But it may be that Poots or his reincarnation did indeed walk with dinosaurs; he'd certainly share their outlook. Now he may share their fate if he refuses to move forward with the provisions of the Good Friday Agreement.