Allowing nostalgic views of the past to influence their actual memories of the past can make the present seem far worse than it actually is. 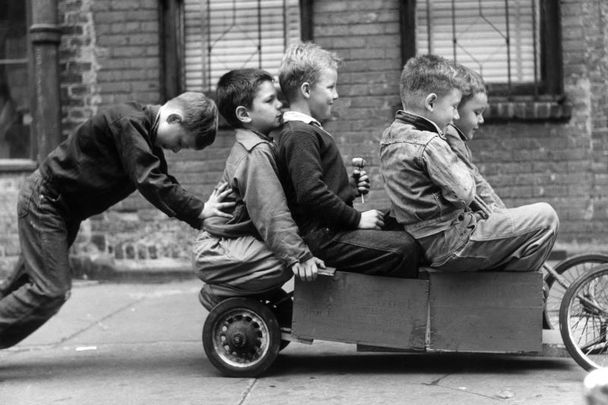 Boys playing in a go-kart on a New York sidewalk, circa 1955. Getty Images

Last week, a Brooklyn native by the name of Jay Rosenblatt recalled his youthful days growing up in Brooklyn.

“Where I lived was very white, mostly Jewish, Italian, and Irish. There was camaraderie with the Italian kids culturally, but we were afraid of the Irish kids and avoided the blocks where the Catholic schools were,” he told The New York Times.

These days, Rosenblatt makes movies. A very particular kind of movie. In the 1990s, he got some attention for a movie called The Smell of Burning Ants, which, as the Times put it, “would firmly establish him in the world of short experimental documentary film.”

Of course. That world.

But Rosenblatt was up for an Academy Award for his new short doc When We Were Bullies. (The Queen of Basketball wound up taking the prize.) And his film was partly inspired by those rough Irish kids.

“There were bullying incidents with them. Once I was shooting baskets and wearing these aviator glasses my grandfather had given me that I loved. These Irish kids surrounded me and wanted the glasses. Rather than give the glasses over, I broke them and threw them to the ground then jumped on my bike and rode home against traffic,” Rosenblatt said.

It all brings to mind that line from the great philosopher Billy Joel about the good old days not always being so good. It sucks that young Jay had to get picked on, but it’s helpful to hear someone, anyone, steer clear of nostalgia for the past.

Because too often, we have to listen to someone go on and on about how much these days stink. Mainly because the past was obviously so much better.

This is a big part of what fueled the desire to “Make America Great Again.”

St. Patrick’s Day, of course, just passed. And it is very possible you found yourself, at some point, talking to someone whose grandparents or great-grandparents came from the old country. Back in a time when all immigrants worked hard and knew how to behave themselves.

Or at least, like, the really bad kinds of crime.

Epstein added: “They might bully someone on a golf course, or take over the best tables at city steakhouses, but they didn’t shoot into crowds, hijack your car, or wantonly kill children.”

Presumably, we can all agree on the badness of killing children. Especially “wantonly.” But if you think the old-time Irish, Italian, and Jewish gangsters were barely worse than the schoolyard bullies Rosenblatt encountered, well, you need to check if your concrete shoes are too tight.

There’s a new movie out right now called The Outfit about “a haberdashery in 1956 Chicago that caters primarily to the Irish mob,” as a Wall Street Journal review put it.

And the whole cast must have read Joseph Epstein’s take on old-time Chicago criminals because they seem so suave and dashing. So much so that the Times could not help but call the film “nostalgia-infused.”

This is all harmless enough. That is, until people start allowing nostalgic views of the past to influence their actual memories of the past.

Then the present starts to seem far worse than it actually is. Then we start building walls.

If you can find a historian who can locate some glory years or months or even days in the old Soviet past, well, God bless you, comrade.

Otherwise, let’s worry more about fixing the present, however great or terrible the past might have been.

Because, as the great philosopher also said, maybe tomorrow ain't as bad as it seems.