"Americans keep falling under the spell of the same wizard behind the curtain, the one who makes exactly half of us angry and scared, and the other half haughty and righteous." 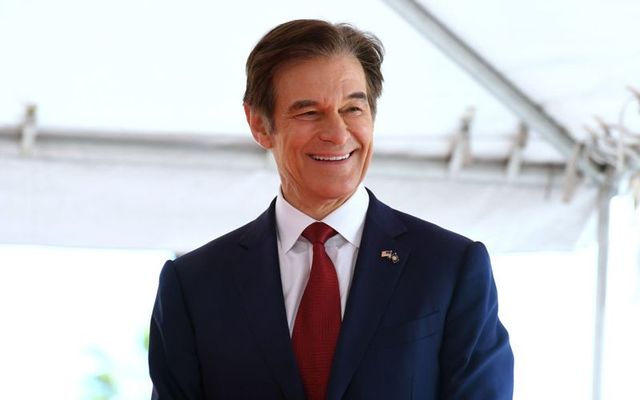 Dr. Oz must be shocked. Shocked.

Here he is, the successful son of an immigrant. And he just wants to move from the medical field to politics. Presumably because he wants people to have the same opportunities he’s had, and feed his ego while doing so.

You also probably think of building a wall.

So does David McCormick, a supporter of the Trumpian border wall, who is expected to challenge Oz in the 2022 Pennsylvania Senate primary.

“Late last year,” The New York Times reported in a front page story this week, “David McCormick flew to Florida for a private meeting with Donald J. Trump, angling to get in the former president’s good graces ahead of a Republican primary that would soon pit him against…the celebrity surgeon and television personality.”

Of course, things get spicy.

“As Mr. McCormick and his wife…made their case, the topic soon turned to electability and Dr. Oz’s Turkish American heritage, which has since become a central point of contention in the campaign,” the piece continued.

“At one point, Ms. Powell McCormick, an Egyptian-born Coptic Christian who is fluent in Arabic, pulled out a picture that showed Dr. Oz alongside others wearing Muslim head coverings, according to four people briefed in detail on the exchange…Ms. Powell McCormick told Mr. Trump that the fact that Dr. Oz was Muslim would be a political liability in parts of Pennsylvania.”

Hey, 2012 called! They want to see your birth certificate, Doc! The long form one! If you are, in fact, a doctor!

That a guy named Mehmet Cengiz Oz might be viewed with some suspicion “in parts of Pennsylvania” is about as shocking as the revelation that the sun might, in fact, rise tomorrow.

That an Egyptian-born Arab speaker may have played a key role in this sordid scheme is, I will admit, a colorful detail.

That the whole story is based on “four people briefed in detail on the exchange” reveals how desperate the Times was to break this story of bigoted Republicans.

For the record, Dr. Oz plans to “renounce his Turkish citizenship if elected.” No word yet on if Trump will ask if Oz is now, or has ever been, a member of the Lollipop Guild.

This whole mess simply reveals Americans keep falling under the spell of the same wizard behind the curtain, the one who makes exactly half of us angry and scared, and the other half haughty and righteous.

Right about here is where liberals pat themselves on the back, and say those bigots at Mar-a-Lago and “parts of Pennsylvania” are no better than those 1850s anti-Irish brutes.

Oz himself referred to “slurs made in the past about Catholics and Jews.’”

During 2017 hearings, “Senator (Diane) Feinstein voiced an anxiety that Barrett’s religious beliefs might pose conflicts with her judicial role.”

Said Feinstein, “The dogma lives loudly within you.”

Cue the thunder and lightning!

So silly.  Because, according to The New Yorker, Feinstein had “a legitimate point, but…used an odd, unfortunate phrase.”

Need we mention here if Barrett is a practicing Muslim, Catholic or Jew? Does it matter?

Not at all. Pay no attention to the wizard behind the curtain. Just keep getting scared and mad.