The GOP should know that some of their reddest faces and loudest voices come from — wait for it — names right out of the AOH. 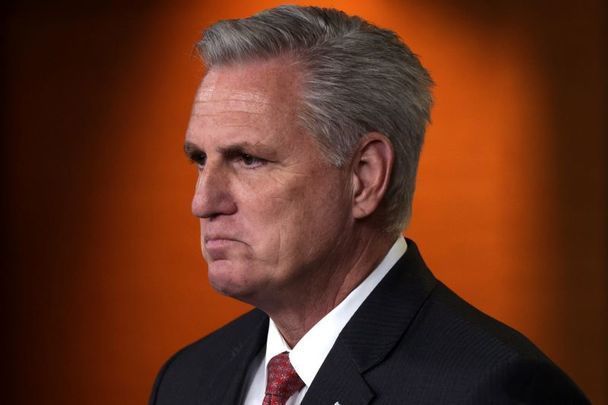 You've got to give this to Trumpy right-wingers: You can’t accuse them of being squishy or wishy-washy.

They are so all-in and far-out that Kevin McCarthy, the House minority leader, a reliable conservative with a name right out of the AOH, is being dismissed as a dreaded Republican In Name Only (RINO) by the QAnon wing of the party.

Yet McCarthy still wants to be the next speaker of the House, if Republicans take it back in November.

Along the same lines, as Russian creep Vladimir Putin orchestrates a bloody invasion of Ukraine, you might expect even the QAnon kooks to criticize Putin, if for no other reason because he’s going to mess up the global economy as he slaughters Ukrainians with his pointless war.

But no. The Trumpers and the Tuckers still kind of praise Putin, while certain Trump-adjacent conservatives, even in the face of Putin’s war mongering, offer another chorus of “Let’s Go Brandon!”

“Republicans across the country who are closest to the party’s base — House members and primary candidates — have often sought to deflect questions about their stance on Ukraine with answers that avoid breaking with Mr. Trump or agreeing with President Biden,” a report in The New York Times said last week.

“A chorus of Republicans are arguing that the White House is worrying more about a distant conflict than about illegal immigration.”

As the Republican members of one House committee put it on their Twitter account: “Why does Joe Biden care more about Ukraine’s border than the U.S. southern border?”

Would you like to hear how dumb these Republicans are? They are determined to link traitorous Democrats with the illegals “invading” the U.S. They fear that those are all future voters — and they are right.

But the scary truth for Democrats is that many of these immigrants may well be future Republicans.

The GOP should know this because some of their reddest faces and loudest voices come from — wait for it — names right out of the AOH.

“I grew up in a very Irish Catholic neighborhood in Brooklyn in the 1950s,” Boston College professor James F. Keenan wrote in an insightful recent America magazine article titled “Populism in Post-Trump America.”

“We were almost all of the working class...We were profoundly suspicious of the Democratic Party and viewed it as the elite. We thought they had sold us out. In 1960, though 80 percent of Catholics in the United States voted for John F. Kennedy for president, no one in my neighborhood did.”

Call them out of step. Accuse them (as liberals always do) of voting “in ways contrary to our own interests,” as Keenan puts it.

Or maybe they were simply blazing a right-wing trail. For Flynn and McCarthy, Bannon, Hannity and O’Reilly.

And the story of immigrant political shifts does not end with some Fox News Hibernian hour.  It’s still going on right now.

In recent weeks The New York Times, never one to give aid or comfort to the un-woke, has done some great reporting about Hispanic immigrants and their children in Texas.

These stories are about folks who were longtime Democrats but are now ready to become Republicans.

Last week, Times reporter Jonathan Weisman described the “shock for both (political) parties of seeing Hispanic voters lurch toward Mr. Trump in 2020. Zapata County…is heavily Latino; Hillary Clinton won it by more than 30 points in 2016, then it went to Mr. Trump by about five points. Ms. Clinton’s 60-point margin in Starr County, which is 96 percent Latino, shriveled to a five-point advantage for Mr. Biden.”

In another recent eye-opening dispatch, the Houston bureau chief for the Times, J. David Goodman, described the “quiet political upheaval of Hispanic elected officials leaving the Dems for the GOP".

“It took me a while to realize that my thoughts are more Republican," said justice of the peace, Corina Arredondo, citing issues such as ‘abortion and border security,’” he wrote.

If a political party has trouble with yesterday’s immigrants, as well as today’s, that party is in some serious trouble.